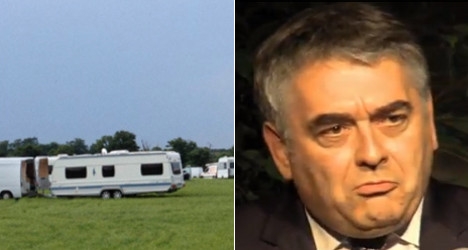 A French lawmaker was fined €3,000 for defending crimes against humanity. Photo: Screengrab

A French court on Tuesday fined an MP €3,000 for saying that Nazi dictator Adolf Hitler "maybe did not kill enough" Roma.

The appeals court in the Western town of Angers slapped the fine, equivalent to $4,000, on Gilles Bourdouleix, who is also mayor of the nearby town of Cholet.

The 54-year-old was involved in an altercation in July last year during a visit to a field in his commune that was occupied illegally by a travellers' community.

Accused of racism and assailed by Hitler salutes, Bourdouleix mumbled to a journalist that "maybe Hitler didn't kill enough of them".

A local French paper carried a report the next day with his comments and the resulting uproar forced him to resign from his party, the centrist UDI.

His comment sparked huge outrage, with then Interior Minister Manuel Valls calling for the lawmaker to be "severely punished" for the comments.

In January, he was convicted for condoning a crime against humanity and fined 3,000 euros but the fine was suspended.

But both the prosecution and Bourdouleix appealed, the latter saying he was innocent given the context in which he spoke. Bourdouleix also alleged the recording was tampered with.

The lawmaker had made controversial remarks about Roma in the past, including in November 2010, when he threatened to drive a truck through one of their caravan camps, and last November, when he said France was facing a "new invasion" from the community.

In August 2013 a Roma rights group based in southern France filed a police complaint against a Facebook page entitled "Adopt a Gypsy", for what it called the "flood of hatred" brought on by the page on the social networking site.

And later that month the cover story of a French magazine headlined "Roma overdose" about the problems caused by the Roma community caused outrage.

SEE ALSO: Facebook under fire over 'Adopt a gypsy' page