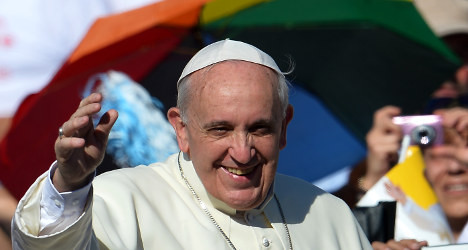 Abortion and euthanasia will be among hot button issues on the table Friday when Pope Francis meets embattled French President Francois Hollande, under pressure after revelations of an affair but hoping to woo back Catholic voters.

Francis has largely avoided public diatribes on Church doctrine but Vatican watchers say he is likely to press the Socialist leader on issues including changes to abortion legislation and a drive to legalise euthanasia.

"They will certainly not play hide-and-seek. There will be no holds barred," a high-ranking prelate told AFP on condition of anonymity.

The 59-year-old Hollande is plagued by low popularity and hopes to reconcile with a Catholic electorate largely hostile to his liberal policies.

He sees the visit as a chance to send "a strong message of dialogue and attention to the Catholics," an advisor said at a briefing ahead of the trip.

He may also be hoping some of the pontiff's popularity rubs off on him.

His quest will be made no easier by lawmakers' decision this week to greenlight a change in the country's abortion laws, effectively making it easier for a woman to terminate a pregnancy.

Anger among staunch Catholics has also been fuelled by plans for the legalisation of assisted suicide — with French bishops speaking out this week to condemn a topic Hollande promised to support in his electoral campaign.

Relations between part of the electorate and the government soured notably last year when France legalised gay weddings, despite hundreds of thousands of people taking to the streets to hold huge protests.

Some 110,000 frustrated Catholics have signed a petition calling on the congenial Francis to get tough and raise their concerns with Hollande.

The 77-year-old pope was initially hailed by liberals as a possible ally, but while he has called for "mercy" toward gays, divorced people and women who have abortions, Vatican experts say Francis is a conservative at heart.

In January, he denounced abortions as a "frightful" symptom of today's "throw-away culture", and on Wednesday he tweeted his support for US Catholics taking part in the annual anti-abortion "March for Life" in Washington.

Hollande's advisors have said that while an understanding on abortion is out, the Socialist is interested in hearing the pope's stance on euthanasia.

The pontiff is a strong supporter of the traditional family, and the president's recently-revealed affair with a 41-year-old actress may be a topic both leaders wish to avoid.

"Hollande's trip has clearly come at a difficult time in his private life," the government advisor said.

The president's official partner, Valerie Trierweiler – for whom he left fellow Socialist politician Segolene Royal, the mother of his four children – will not be present, the Elysee said.

Controversies aside, the leaders are likely to discuss their common desire for social justice and peace, particularly in conflict-torn parts of Africa, as well as the protection of Christian minorities in the Middle East.

They are expected to discuss the crisis in Syria, in particular the progress of peace talks begun Wednesday which and have been marred by heated disagreements between delegations from President Bashar al-Assad's regime and the exiled opposition.

Hollande has previously said that the pope, a "great moral authority", could help "find a political solution" to the country's devastating civil war.

They may also touch on shared goals to protect the environment, do away with food waste, promote social justice and reduce the gap between rich and poor.