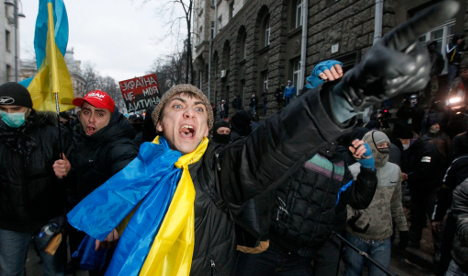 France summoned the Ukrainian ambassador on Friday to voice its "condemnation" of the government's response to protests in the capital, Kiev, saying security forces had been ordered to open fire on demonstrators.

"I instructed the Quai d'Orsay (foreign ministry) to summon the Ukrainian ambassador in France today, which is a gesture to show that there is condemnation on France's part," said Foreign Minister Laurent Fabius.

"There were orders to fire on the crowd, which is clearly unacceptable."

The violence has come during Ukraine's biggest pro-democracy rallies since the 2004 Orange Revolution and have demanded President Viktor Yanukovych's resignation over his rejection, under Russian pressure, of a pact seeking closer ties between the ex-Soviet state and the EU.

The economically struggling nation of 46 million people was thrown into crisis when Yanukovych snubbed EU leaders at a summit and refused a deal that would have paved Ukraine's way to eventual membership in the 28-nation bloc.

EU leaders primarily blamed the decision on the stinging economic punishments Russia had mooted should Ukraine take the fateful step toward the West.