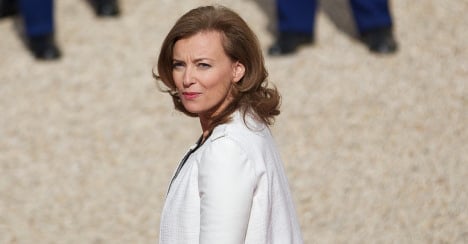 Valérie Trierweiler is set to take a break from France and head to India as part of an official trip to help out an aid organisation. Photo: AFP

Trierweiler "is going to Mumbai", an aide said, adding that the two-day trip was organised by French relief organization Action Against Hunger and had been planned long in advance.

The aid group had invited Trierweiler in her official capacity and was paying for the trip, the aide said.

In Mumbai, Trierweiler will be shown around by French actress Charlotte Valandrey, who is involved in the cause of promoting organ donations and transplants.

Trierweiler remains holed up in a presidential retreat near the chateau of Versailles outside Paris since leaving hospital last Saturday. She was hospitalized for a week and treated for a bout of "tiredness" brought on by the scandal.

On Thursday, Frederique Giffard, a lawyer for 48-year-old Trierweiler, said her client was aware that a "clarification" to the tangled situation was due.

Griffard remained evasive on the question of whether they would split, saying: "The president and my client are thinking. The decision is theirs alone. It is very difficult for Valerie Trierweiler to remain calm in the face of this media and political pressure. But she is aware that a clarification is necessary."

But Trierweiler reacted furiously to the lawyer's remarks and chastened Giffard for speaking without her permission.

Her chief of staff Patrice Biancome said he was "the sole person authorized to speak in the name of Valérie Trierweiler", an announcement interpreted as a sign that she considered herself first lady and that no clarification was necessary as far as she was concerned.

Hollande had promised in a mid-January news conference that he would publicly define what sort of relationship he and Trierweiler are in before going on a February 11th state visit to Washington.

The 59-year-old leader has so far made no official comment on whether France still has a first lady.

But the popular Le Parisien headlined its lead story with the title: "First lady, it's over."

Trierweiler, a feisty figure who has worked for the magazine Paris Match and was dubbed "Rottweiler" by detractors, was initially a discreet companion of Hollande when he was with a fellow Socialist Party heavyweight, Segolene Royal, the mother of his four children.

She emerged into the spotlight before he was elected president, and warned she would not be a wallflower, saying in April 2012: "I have character, they cannot muzzle me."

That was quickly proven when Trierweiler tweeted her support in legislative elections for an independent rival of Royal, someone with whom the first lady did not have warm relations.

The tweet went down badly in France, and Trierweiler's reputation suffered, with many deeming her somewhat haughty and arrogant.

But she has not commented on the latest scandal since French glossy Closer broke news of the affair on January 10th.

She only tweeted after being released from hospital on January 19th to thank her supporters.

"Very touched," she wrote, using her personal and not her official account.

After Hollande was elected president, Trierweiler took a leave of absence from Paris Match and engaged in charitable activities.

She had visited India in February last year on an official trip with Hollande and went to a shelter for street children in the capital New Delhi.