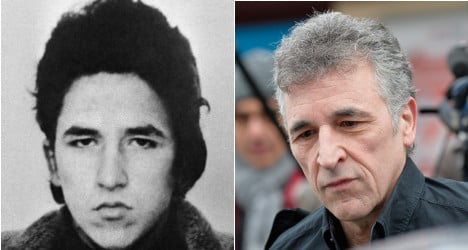 Philippe El Shennawy seen here on the right in 1975 and on Friday, January 24th on the day he was released from Prison. Photo: AFP

When he walked out of a French prison on Friday morning 60-year-old Philippe El Shennawy ceased being France’s longest held inmate. First locked up in 1975 prisoner no. 969912, dubbed the "eternal inmate" by prison officials, has spent most of the past 38 years of his life behind bars –  a prison term that suggests he was no choir boy.

After two escapes and having racked up 13 convictions, he had a parole date for some time in 2032 to look forward to. He would have been 78. But after a lengthy campaign for freedom, French President François Hollande granted him a pardon in March 2013. (Philippe El Shennawy (L) walks with his wife Martine after being released from Fresnes prison near Paris following 38 years of incarceration on January 24, 2014.)

So what did he do wrong?

El Shennawy, born in Egypt in 1954, was first locked up for aggravated theft when he was 19. By 1977 he was convicted of taking hostages in a CIC bank during a robbery in Paris and got life in prison. He claimed he was innocent and the sentence later got cut to 20 years behind bars, newspaper Libération reported.

El Shennawy was released on parole in 1990 and subsequently moved to Corsica, with his wife Martine El Shennawy, to raise rabbits. Life could have continued on this way, but he decided to go to Paris to visit his son, a so-called “visiting room baby” who had been conceived during a prison visit from his mother.

The problem was El Shennawy was forbidden from visiting Paris, but travelled there in 1992 on false papers anyway and was caught. He was handed a further 15 years in prison.

Labelled a ‘high surveillance inmate’ he spent most of his time in isolation and was frequently moved between prisons. In all he would be transferred 42 times, newspaper Le Parisen reported. His wife moved on 20 different occasions to remain close enough to visit him.

In 1997 he escaped while out of prison on temporary release and immediately rejoined a life of crime. Again he was caught and sent back to jail with more convictions to add to his criminal CV: receiving stolen credit cards, associating with known criminals. In 2004, after five years in a prison mental hospital he again decided he had had enough and escaped again.

But, no surprise, he was caught again in 2005 while meeting his wife for Valentine’s Day. He’d also committed some armed robberies while on the run and so got another 13-15 years tacked on to his sentence.

“He has no blood on his hands,” his wife once said. “He has been judged as if this was the United States.”

His campaign to get himself out early had begun even before his last escape. In 2003 he mounted a 24-day hunger strike in order to get a computer in his cell.

He then sued France before the European Court of Human Rights on allegations he’d been strip searched four to eight times per day while in one prison. He won the case.

Why let him out?

In addition to El Shennawy’s legal attempts to get himself out of prison, his freedom became a cause for lawyers, writers and celebrities, including ex-footballer Lilian Thuram. They published a letter in French newspaper Le Monde in 2012 demanding he be released.

If he’d served his whole sentence, "he’d have spent 54 years in prison, even though he has no blood on his hands,” they wrote, pointing to the fact that he had never physically hurt or killed anyone. “Prison is not intended to dehumanize the people its holding. To hold someone for 54 years, that’s not to punish him, it’s to destroy him, kill him.”

A court approved El Shennawy’s release just this week, the delay was due in part to formalizing his job situation. The judges wanted a signed contract from El Shennawy's employer, which they have received.

And what will the man who’s spent more of his life in than out of prison do on the outside?

If he can finally stay out of trouble he’ll be working for a company with 20 or so employees that specializes in cultural projects and events, Le Monde reported this week.