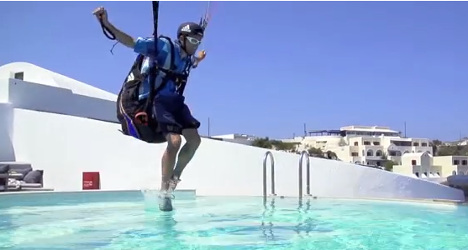 Jean-Baptiste Chandelier dipping his feet in a swimming pool at a hotel in Greece. See what else he gets up to. Photo: Screengrab YouTube

He could be the biggest advert for the sport of paragliding or on the other hand he could bring on a bout of vertigo and make you never want to go near a mountain again.

But if the number of people who have seen Jean-Baptiste Chandelier’s video – now into the hundreds of thousands – are anything to by then paragliding clubs can expect a few new members this summer.

In his latest video montage titled “Touch”, Chandelier takes us from the famous Aguille-du-Midi summit in the Alps to a luxury hotel in Greece and Col du Galibier, also in the Hautes-Alpes.

Those who have seen the video have fallen under its spell.

"Watched this half a dozen times already… and it only gets better," said one commenter on YouTube.

He glides into swimming pools, surfs along roads and performs stomach-churning 360° flips high above the snow-covered Alps.

Enough of the preamble. Watch him for yourself.

If you liked this video then chances are you will also be impressed by the one below.