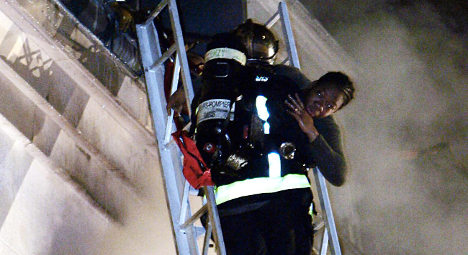 Firefighters rescue a man from the Paris-Opera hotel in central Paris, early 15 April 2005, after a fire broke out. Photo: Pascal Pavani/AFP
A young woman convicted of causing a massive blaze in a hotel that killed 24 people, including 11 children, was sentenced to three years in prison on Thursday for her role in Paris's worst fire since World War II.
The inferno in April 2005 gutted the Paris-Opera hotel, which housed many struggling immigrant families just behind the upmarket Galeries Lafayette department store. Firemen who arrived at the hotel described an "apocalyptic scene", with bodies having "rained down on the street, and panicked people throwing children out of windows".
A judge blasted the conduct of Fatima Tahrour at a Parisian court house.
"Your blatant carelessness is directly at fault for the death of 24 people," the head judge said during sentencing, newspaper 20 Minutes reported. "It was quasi-impossible for you to not recognize the risk of fire. It is extremely probable, to say the least, you were aware the fire had started."
The fire was one of several that year in buildings housing foreigners in Paris, sparking a public outcry over housing for the poor and prompting authorities to reinforce fire standards in hotels.
Nabil Dekali, the nightwatchman on duty at the hotel on the night of the blaze, has his then-girlfriend Tahrour and his parents Rachid and Fatima, who managed the building, were tried for their role in the blaze.
Tahrour has admitted accidentally causing the fire when, in a fit of anger, she threw clothes on candles on the ground where she and Dekali were going to sleep, then left the building.
Dekali had taken cocaine and alcohol, and is accused of not having immediately alerted the firemen, instead trying to extinguish the flames himself. He did not have the necessary fire safety training.
There were also too many people in the hotel, with 77 people in a building that could only legally house 62.
The judge cited a transcript of the first call made to the firemen by a nightwatchman from a neighbouring hotel.
"There are loads of people at the windows, the whole hotel is burning," he said, citing the call. "A lot of yelling was clearly audible in the background over the whole length of the call," he added.
Eleven of those killed died by throwing themselves out of windows.
Dekali and his ex-girlfriend risk three years in prison, and his parents five.
Most of the 22 families housed in the hotel had been sent there by the SAMU Social, a humanitarian service that provides care for homeless people and those in social distress.
"The neglect is blatant, huge," said Yann Le Bras, the lawyer for five of the victims' families.
Romain Boulet, who is defending the hotel managers, said the building was "one of the safest in its category, there were no indecent housing conditions".