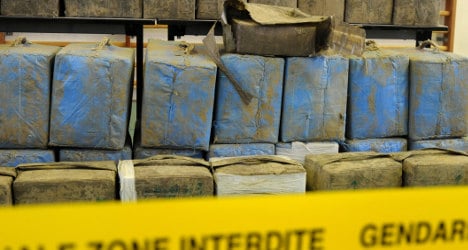 Photo shows a huge seizure of drugs confiscated in the French city of Grenoble. Perhaps this is why dealers were forced to "temporarily close" for a while. Photo: Jean-Pierre Clatot /AFP

At first glance the notice pinned to a wall on a street in the French city of Grenoble appears bizarrely out of place.

But residents on the street and local police know exactly what it refers to, local newspaper Le Dauphiné Libéré reported on Thursday.

“Temporary closure. Please accept our apologies. We will reopen soon. Thank you for your understanding,” reads the note, that you would more expect to see on a local shop if the owner has had to rush off to attend a funeral or take a child to the doctors.

But in this instance, the notice at a spot on rue Albert-Thomas in the Mistral neighbourhood appears to have been put up by the customer-friendly local drug dealers.

The area is known to police as the place where dealers peddle their narcotics and officers are hoping that whatever caused the “fermeture exceptionelle” is not resolved quickly.

“We hope that the actions of the police have counted for something,” said Commissioner Patrick Mairesse. “The fact that we often make arrests around this area and that people are convicted, has perhaps made it a little harder for them to recruit.

“We just hope this closure is not just temporary,” he added.

The story has caused a bit of a stir on Twitter on Thursday where some tweeters were commending the dealers on their sense of humour.

"Funny these dealers… Grenoble, When the dealers announce the temporary closure of a point of sale.