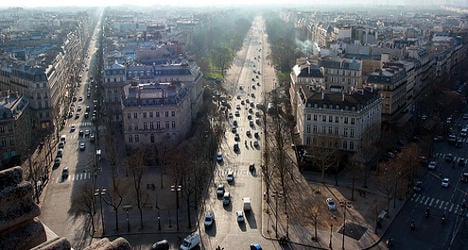 Paris may turn one its busiest streets into a park. Photo: Nick Bramhall/Flickr

Outgoing Paris mayor Bertrand Delanoë has long been battling against the dominance of cars in the city and it appears he opened a new front on Sunday when a newspaper published a report that the Town Hall wants to convert Avenue Foch, one the capital’s busiest streets, in the posh 16th arrondissement, into a huge public space.

Avenue Foch links the famous Arc de Triomphe to the western edge of Paris at Porte Dauphine and is perhaps best known for being home to the finish line for the annual Paris marathon.

Perhaps surprisingly the plan has not been condemned by a national motorist watchdog group.

Head of 40 Millions d’Automobilistes Pierre Chasseray said the idea of a green space is a good one, but the planning of the project must be done in consultation with stake holders like avenue residents and shopkeepers.

“A green space is not unappealing, it can be rather good. But we are going to have to keep a place for cars as well,” he told The Local. “We have to remember that a motorist is a pedestrian who hasn’t parked yet.”

The avenue already has large bands of trees and grass and pedestrian-friendly pavements, however, the road itself is a “motorway inside Paris”, French daily Le Monde reported. The bands of greenery serve as de facto parks where people stroll and even sunbathe when the weather’s right.

According to the outline of the proposal, revealed in newspaper Le Journal du Dimanche, the 1.3 km stretch of avenue that serves as an entry point into the city would be closed to cars. However, traffic would still be able to pass along the narrow feeder streets that run parallel to the main avenue.

The resulting space would be home to two massive projects.

On the end of the road that leads up to the Arc de Triomphe officials imagine a massive public square, new housing and business. While at the other end, which leads to the city’s border and the Bois de Boulogne park, the plans call for a green space with trees.

On a par with closing off a stretch of Park Avenue in Manhattan, the plan for Avenue Foch has become a divisive topic in the Paris mayoral race, with elections just under two months away. Socialist candidate Anne Hidalgo has given her full support, while candidate Nathalie Kosciusko-Morizet’s UMP party called the project “completely harebrained”.

Hidalgo said in a statement she is “ready to carefully study this ambitious idea that would energize west Parisian neighbourhoods by building affordable housing for the middle class, all while creating an exceptional public space".

Conservative UMP candidate Kosciusko-Morizet released a much less glowing statement on the idea. Her spokeswoman Valérie Montandon criticized Hidalgo for wanting to “degrade that which already exists rather than rising to the urban planning challenge of working with neglected space.”

The project is decidedly an "if" at present, with no official approvals and not even a budget that has been made public. It’s worth noting, however, the avenue belongs to the city of Paris, so there would be no cost to acquire the land beneath it.

The plan would just be the latest move in current mayor Delanoë's longstanding campaign to improve the lives of pedestrians at the expense of motorists.

In a controversial move last year the city banned car traffic along a 2.3 km stretch of the Left Bank from the Musée d'Orsay to the Pont de l'Alma.

Walkers and cyclists now have the road to themselves, though critics accused outgoing Delanoë of simply pushing more traffic on to fewer roads.