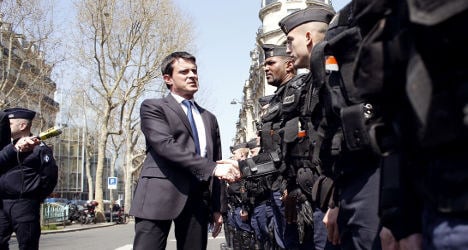 In a TV interview on Tuesday France's Interior Minister Manuel Valls admitted that he had smoked marijuana, but before French marijuana smokers get excited Valls quickly added he doesn't support legalization of the drug.

Valls told BFM TV host Jean-Jacques Bourdin that he,"could have smoked cannabis, maybe once," in his life. However, he still supports keeping marijuana illegal because "society needs structure and rules."

Valls is a tough-talking leader who is considered by many as being a future presidential hopeful. He routinely receives high approval ratings from the French people in opinion polls, many of whom want to see him replace Jean-Marc Ayrault as Prime Minister.

His admission comes the same week as a New Yorker magazine interview with American President Barack Obama in which he said smoking marijuana is "no more dangerous" than drinking alcohol.

Sales of legal recreational marijuana began in Colorado in January, after voters elected to end the state's non-medical prohibition of the drug.

French law remains firmly against medical and recreational marijuana although earlier this month the government sanctioned a cannabis-based medicine for the first time.

That has not stopped cannabis supporters from challenging the rules. In March cannabis users across the country took the high-risk step of registering “Cannabis social clubs” with local authorities as official non-profit organizations. The stunt is a bid to win public backing but it could land them up to 30 years in jail.

The Loire-Atlantique regional council in the western city of Nantes was one of numerous local authorities to receive an official application to register as a non-profit group from a local cannabis social club.

Cannabis-growers in France today face a harsh legal reality. Anyone caught cultivating the plant can face up to 30 years in prison and a whopping €7.5-million fine – penalties on a par with those reserved for terrorists in France, according to Europe 1.