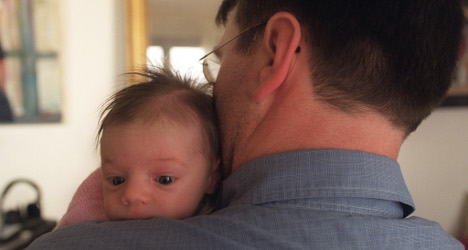 In a bid to get more fathers to take a break from their careers to look after their children, French lawmakers voted this week to reform the country’s policy around parental leave.

The reform, inspired by a similar change in policy in northern European countries will give fathers the right to take six months off work, whilst hopefully encouraging mothers to return to their posts.

The current law in France states that either parent is entitled to six months leave after the birth of their first baby. This leave is, in the vast majority of cases, taken by the mothers.

But under the new law parents will be eligible to take one year off work, but only if the leave is shared between the father and mother. In reality that would mean a father taking six months paternity leave after his wife has returned to work.

Currently if a couple has a second child, one parent, again usually the mother, is currently entitled to a maximum three years of leave. Under the new law, however, the length of leave would be reduced to two and a half years, unless the father agrees to take six months off. These changes will affect all children born or adopted after July 1st, 2014.

In Germany a similar move in 2007 proved a success with the numbers of fathers taking parental leave multiplying by six in just three years, French TV TF1 reported.

The French government is hoping for a similar effect this side of the Rhine where currently out of the 540,000 parents claiming France’s parent leave allowance (CLCA) only 18,000 of them are men.

One key factor that may prevent fathers in France jumping at the chance to take six months off, as their German counterparts have done, is money, Rachel Silvera a lecturer in economics and equality for the university of Paris X tells The Local.

“Everyone is agreed that we have to encourage more fathers to share the burden of looking after their children," she said.

"But in Germany the financial allowance for parental leave is a lot more attractive than in France.

“In Germany it is around 67 percent of their salary, with an upper limit of €1,800 a month, whereas in France the compensation is around €573 a month."

We all agree fathers must do more

Silvera says France must hike up the monthly allowance it offers parents or parental leave will remain “a poverty trap”.

“The best option is to reduce the overall length of parental leave in France, (for the second child) and to link the allowance to a person’s salary."

“With the measure currently on the table only the most unskilled men and those most cut off from the world of work will be enticed by paternity leave," she adds.

“I just do not see men earning substantial incomes being happy picking up a salary of around €500 a month."

Women in France earn much less

One of the problems that will act as a hurdle to fathers taking time off work is the disparity in pay between men and women in France.

France’s national statistics agency INSEE, revealed earlier this year that women in the public sector in France earn on average 18 percent less than men doing the same job and that gap widens to 28 percent.

“Yes it’s a problem but if everyone, men and women, were paid their parental leave allowance in relation to their salary that was capped at say €1,800 then that would help,” says Silvera.

The lecturer also says it would be necessary for France to increase the amount of highly coveted crèche places if the government wants to shorten the length of parental leave in the future.

The shortage of child care places is the reason why France’s influential National Union of Family Associations (UNAF) are also sceptical about the new parental leave laws.

“We are opposed to this measure to reduce the length of parental leave. Given the fact that less than 20 percent of men will take the option of six months off, families will have a lot of trouble trying to find child care for their kids," said François Fondard, president of the UNAF.

For Silvera the fact there is a public debate on the issue is positive, but she believes France must do more to catch up with other countries in Europe.

“I really don’t think this bill will have the desired effect the government wants, which is to increase the number of fathers taking parental leave from 18,000 to 100,000.

“It may help put the issue in focus but there’s a lot of work to do. France is not yet like Sweden.”