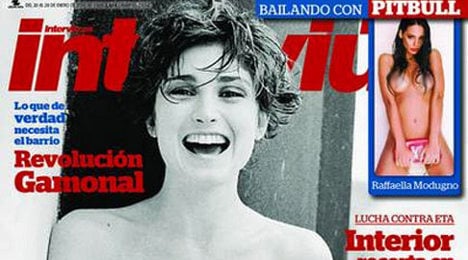 the front cover of Spanish magazine Interviu, which published topless images of Julie Gayet at the weekend. Photo: Screengrab Interviu

A topless image of François Hollande’s alleged mistress Julie Gayet was plastered on the front cover of a Spanish magazine this weekend.

The celebrity gossip magazine Interviu published the photograph of 41-year-old Gayet in its weekend edition.

According to Spanish newspaper El Mundo the image was taken back in 1998 when she posed for Interviu looking “fun and sexy”.

“Looking at her 15-years later we can see that her looks and her body have not lost a shred of its beauty,” the magazine writes.

Interviu also published several other revealing shots of Gayet, from the photo shoot taken when she was 26-years-old, inside the magazine.

The magazine was clearly hoping to take advantage of the global publicity surrounding the star and her alleged fling with Hollande, which began when Closer magazine printed a seven page report detailing their romance.

Who is Julie Gayet? Ten things to know about the French actress Although the reports were condemned by many in France, the magazine flew off the shelves with Closer having to produce thousands of extra copies to meet demand.

El Mundo points out that it is not the first time naked photos of the partner or in this case an alleged partner of the French president have appeared in the public domain.

Similar images of Carla Bruni, the wife of Hollande’s predecessor Nicolas Sarkozy, were also dusted off and republished once she became France’s First Lady.

Those images continue to cause a stir and have left a few Euro diplomats embarrassed in recent weeks.

Hollande's alleged fling with Gayet continues to make headlines in France and abroad with the president forced to answer a question on a trip to the Netherlands on Monday over the health of his partner Valérie Trierweiler, who spent a week in hospital after news of the revelations broke.

A journalist asked how Trierweiler was during a joint press conference with Dutch Prime Minister Mark Rutte in The Hague, where Hollande is on his first trip abroad since news of the affair broke.

"I thank you for your question," Hollande said.

"Valérie Trierweiler is doing better and resting at the moment at La Lanterne," he said, referring to the presidential residence in Versailles, outside Paris.

"I don't have any other comment to make," he said.