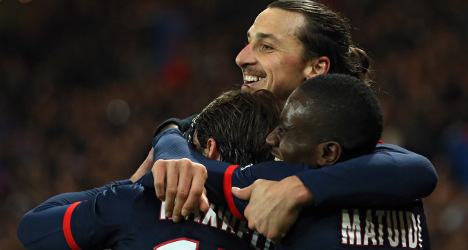 Paris Saint-Germain cruised to a 5-0 thrashing of Nantes on Sunday to maintain their five-point lead over Monaco at the top of Ligue 1.

Earlier in the day, the Principality club had kept the pressure on the champions with a routine 2-0 win at mid-table Toulouse.

Brazil centre-back Thaigo Silva opened the scoring for PSG after just 10 minutes at the Parc des Princes as he knocked home the loose ball from six yards after Nantes goalkeeper Remy Riou failed to hold onto Edinson Cavani's header.

PSG had all but put the game to bed by half-time as Zlatan Ibrahimovic doubled their advantage from the penalty spot.

However, it wasn't without controversy as Chaker Alhadhur was deemed to have brought down Marco Verratti, despite television replays suggesting the Italian midfielder had merely slipped.

But just six minutes after the restart it was all over as Blaise Matuidi's back post header found Thiago Motta unmarked to scored from eight yards out.

Nantes were their own worst enemies at times and Papy Mison Djilobodji was penalised for trying to dribble past Verratti, the Italian tackling the defender and sending Ibrahimovic away to cross for Cavani to notch number four.

"I think we need to improve when we haven't got the ball," said PSG coach Laurent Blanc.

"But I am pretty satisfied with pratically everything."

"It's mission accomplished, even though we struggled a lot during the opening 30 minutes," said the Italian coach, formerly of Chelsea, Juventus and Inter Milan.

"It's an important win but we need to back it up. We hadn't played well in our last two matches and it's good for the group's confidence to rediscover winning ways.

"Now we can say that we're back on track but I repeat, we need to back it up."

Ranieri made a change to his starting line-up, bringing in French under-20 world champion Geoffroy Kondogbia to replace struggling Portugal international Moutinho, although the youngster did little to further his long-term prospects of holding down a regular starting position.

Monaco were far from convincing, particularly in the first half, but still turned around at the break a goal to the good through Kurzawa on 36 minutes.

And it was Kondogbia, in a rare moment of quality, who provided the low cross from the left for Kurzawa to score.

Until that point, Toulouse had been by far the better team, although they proved impotent in front of goal.

There was a disappointing performance from Colombian record-signing Radamel Falcao, who missed two glorious chances and has not scored in the league since November 8.

He was replaced by Ocampos with 21 minutes left and it was the Argentine who sealed the win with a goal two minutes from the end.

And it was a strike of rare beauty that looked out of place in an otherwise drag affair as Ocampos scored with an acrobatic bicycle kick that flummoxed goalkeeper Ali Ahamada.

Meanwhile, Lyon won for the fourth time in a row in all competitions to move up to eighth, just one place below Reims, whom they beat 2-0.

Goals from Alexandre Lacazette and Gueida Fofana secured the points as Lyon extended their unbeaten run in all competitions to 10 games since a 4-0 league reverse at PSG.

On Friday night, Saint-Etienne closed to within three points of a Champions League place by beating third-placed Lille 2-0.