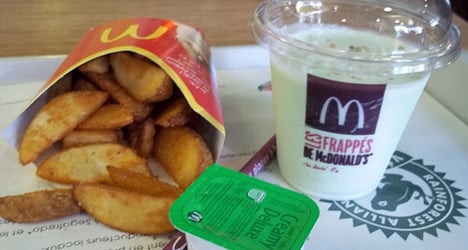 A woman discovered a surprise danger to fast food at a French McDonald's restaurant. Photo: Ellevalentine/Flickr

A woman was left with an injury, that resulted in her being signed off work for ten days, after she was hit in the face by a flying McDonald's potato wedge, it emerged this week.

The injury was caused by a freak incident, which all began when a customer at a McDonald's near the south-western city of Bordeaux grew irate at the slow speed of the service, French newspaper Sud Ouest reported.

Sick of waiting, the impatient customer finally blew their top and launched a missile, in the form of a potato wedge at a member of the McDonald's staff.

But the wedge missed the employee and instead splattered into the eye of woman who was eating with her family at another nearby table.

The victim was forced to go to hospital where a doctor found the flying ‘frite’ had scratched her cornea. The doctors ordered her to stay home from work for ten days.

The woman has since reported the incident to police, but there was no word on whether investigators had made any progress in their hunt for the spud thrower.

It's not the first time a member of the public has suffered from "fries rage" at a McDonald's in France.

In December The Local reported how an irate customer attacked a drive-thru near Paris with an axe after blowing his top because his fries were too cold.