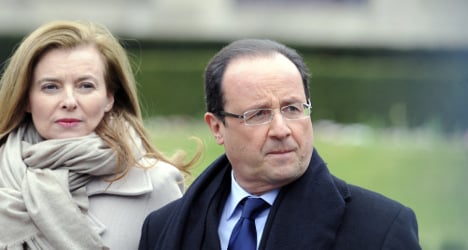 French President François Hollande said Monday his partner Valérie Trierweiler is doing "better" and "resting" following a week's stay in hospital after his affair with an actress was made public.

A journalist asked how Trierweiler was during a joint press conference with Dutch Prime Minister Mark Rutte in The Hague, where Hollande is on his first trip abroad since news of the affair broke.

"I thank you for your question," Hollande said.

"Valérie Trierweiler is doing better and resting at the moment at La Lanterne," he said, referring to the presidential residence in Versailles, outside Paris.

"I don't have any other comment to make," he said.

Trierweiler on Saturday left the Paris hospital where she had been admitted on January 10th suffering from nervous exhaustion and low blood pressure for La Lanterne.

Concern had been mounting for Trierweiler, 48, after she fell ill following the revelation that Hollande, 59, had been having an affair with 41-year-old actress Julie Gayet.