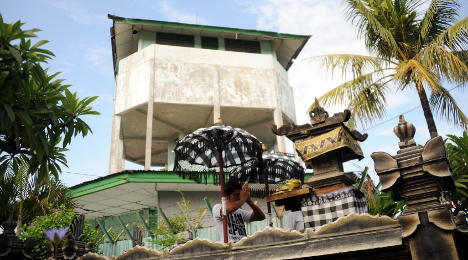 Balinese prisoners praying at the temple next to the Maximum Security jail. A Frenchman faces the death penalty after being arrested with $500,000 worth of crystal meth. Photo: Sonny Tumbelaka/AFP

A Frenchman has been arrested for trying to smuggle more than $500,000 worth of crystal methamphetamine into the Indonesian resort island of Bali, an offence punishable by death, an official said on Monday.

Francois Giuily, 48, was detained Sunday at Bali airport with more than three kilograms (6.8 pounds) of the drug hidden in plastic bags in his suitcase lining.

Airport customs chief I Made Wijaya said the drugs had a street value of $511,280. Giuily could face the death penalty under Indonesia's tough anti-narcotics laws as well as a 10 billion rupiah ($830,000) fine, he said.

Several foreign nationals are on death row for drug-related offences in Indonesia.

British grandmother Lindsay Sandiford was sentenced to death in January last year after being found with $2.4 million worth of cocaine in her luggage as she arrived on Bali.

The latest arrest came as another French national, 40-year-old Michael Blanc, was freed Monday on parole from an Indonesian jail more than 14 years after he was caught smuggling drugs into Bali. Blanc had been imprisoned in a jail in the south of the Indonesian capital Jakarta. Under the conditions of his parole, he must remain in Indonesia until the end of his sentence, on July 21, 2017.

Last Wednesday another Frenchman, Thierry Verchere, was arrested for possession of cocaine with a street value of almost $50,000 on the island.

As Verchere faces a possession charge, and not a smuggling charge, he will not receive the death penalty.