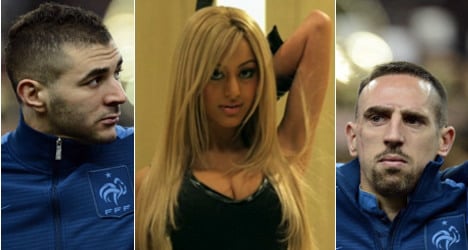 Franck Ribéry and Karim Benzema are due to face trial on Monday on charges they paid for sex with an underage call girl. AFP Photo/ Franck Fife

Neither of the two men are expected to attend the start of the trial in Paris, Ribéry's lawyer Carlo Alberto Brusa said.

Ex-call girl Dehar, who rose to fame under the tutelage of fashion impresario Karl Lagerfeld after the charges emerged, is also not expected to attend.

Brusa said he was confident of an acquittal, after prosecutors recommended the charges be dropped for lack of evidence the men were aware she was a minor.

"We are going in confident and we are going to fight," he said. Dehar has also withdrawn as a civil plaintiff in the case.

"She is not asking for anything," said her lawyer, Daniel Vaconsin. The two players are accused of having paid for sex with Dehar when she was 16, in Benzema's case, and 17, in Ribérys. Although the age of consent is 15 in France, paying for sex with anyone under 18 is a crime.

The trial is going ahead after France's highest court, the Cour de Cassation, ruled that only those aware that a prostitute was under-age can be found guilty of breaking the law.

Ribéry's brother-in-law is also charged with soliciting a minor for sex and five other accused face maximum prison terms of 10 years for aggravated pimping in the case.

Dehar, now 21, became a celebrity following the scandal and has since established herself as a designer of luxury lingerie, thanks partly to being befriended and championed by Lagerfeld, who has described her as a quintessential French courtesan.

Dehar has testified that she had paid-for sex with both players but has said she lied to them about her age.

Dehar's alleged encounters with the two French internationals came to light after she was arrested in connection with a police investigation into the now defunct Zaman Cafe, a nightclub close to the Champs Elysées that attracted an eclectic mix of reality TV stars, criminals and dozens of prostitutes.

Brothers Elie and Georges Farhat, who ran the club, are among the accused.

News of the investigation into Ribéry and Benzema broke just before France's disastrous 2010 World Cup campaign, which featured unprecedented bickering within the squad that culminated in a brief strike by the players and ended in a first round exit.