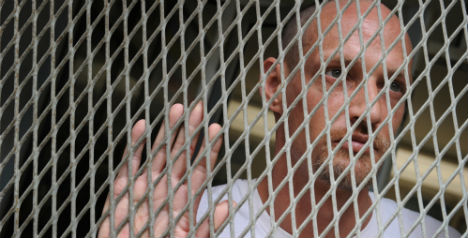 Michael Blanc was arrested the day after Christmas in 1999 at the airport on the resort island of Bali with 3.8 kilograms (8.4 pounds) of hash hidden in diving canisters.

The 40-year-old, who has always maintained his innocence, was originally given a life sentence under Indonesia's tough anti-drugs laws, which provoked outrage in his native France.

His sentence was cut to 20 years and he received several remissions. Following a lengthy battle with Indonesia's complex legal system, he finally succeeded in being granted parole, which is rare for a foreign prisoner.

"He has come out of prison. He has signed his release papers," his mother Helene Le Touzey told AFP on Monday at the prison in the south of the capital Jakarta.

"I am happy, happy, happy," added Le Touzey, who abandoned her life in France to move to Indonesia and fight for her son's release.

After leaving prison mother and son travelled by car to government offices to finalise administrative formalities. Blanc did not comment, with his mother saying he was still in shock

Blanc has always maintained his innocence, insisting that he was given the diving canisters to transport by a friend.

He was sentenced to life in prison on November 16, 2000, a sentence criticised in France as overly harsh.

It was raised by Paris at the highest levels, with the then-prime minister Francois Fillon bringing it up during a visit to Indonesia in 2011.

Blanc's sentence was cut in December 2008 to 20 years in prison thanks in large part to his mother's efforts.

Le Touzey in 2011 started the process to get her son granted parole but her efforts ran into problems.

Indonesian law does not usually allow foreigners to be released on parole after serving two-thirds of their sentence, which is the norm with Indonesian prisoners.

"I could not accept that. The law must be the same for all," she said in an earlier interview.

This hurdle was finally overcome, with authorities allowing Blanc to be freed as long as he remains in Indonesia until the end of his sentence on July 21, 2017.

Talking to AFP shortly before her son's release, Le Touzey said she had "made his bed" to welcome him home.

"There have been real highs and lows but it's really a great relief," she said, before heading to the prison to collect her son.

Blanc is the first foreigner to be freed on parole in Indonesia in recent years, and his release will boost hopes for Corby.

Bali's corrections board in August recommended Corby for early release from the island's notorious Kerobokan jail. But the process has run into a series of bureaucratic hurdles.

Corby was sentenced to 20 years in jail in 2005 for smuggling 4.1 kg (nine pounds) of marijuana into Bali the previous year. She has received several remissions and a sentence cut of five years from the president.