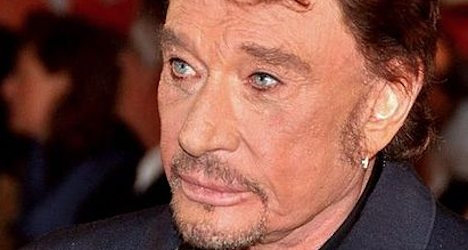 Swiss law requires foreigners to spend at least six months in Switzerland if they want their residence to be officially recognized for income tax reasons.

A radio programme on RTS on Thursday highlighted evidence gathered by reporters who have been tracking the 70-year-old rocker for more than two years.

The singer and his wife Laeticia are very active on social media and their postings of photos of themselves and their family have left an electronic trail indicating very precisely where they have been, the program said.

SEE ALSO: The 'French Elvis' hoping to conquer the US at 70 The evidence from Instagram and Twitter left detailed information about the couple’s time in places such as Monaco, Saint Barth and Los Angeles.

But the postings, localized and dated, show that Hallyday and his family only spent 15 days at their home, “Chalet Jade” in Gstaad, located in the canton of Bern, according to the RTS report.

The findings have prompted Yann Galut, a Socialist party deputy from the French parliament, to call on “Johnny” to clarify his situation or face a tax evasion investigation.

Galut is the sponsor of a law project , adopted in November 2013, that attempts to fight against tax fraud.

“Johnny Hallyday must clarify things so that we can determine if he is leaving the category of tax exile to (join) that of tax evaders,” the MP told RTL Radio in France.

Hallyday, whose real name is Jean-Philippe Smet, has owned a chalet in Gstaad, a favorite hangout for wealthy foreigners including movie director Roman Polanski, since 2006.

French magazine Challenges reported that Hallyday was taxed at a level of just over 20 percent on earnings of €2.6 million ($3.54 million) in 2011.

Voters in the canton of Bern in 2012 rejected an initiative to scrap the reduced tax level for foreign residents.

According to cantonal tax authorities, it is up to foreign governments to prove that their citizens are not established in the canton, RTS reported.

The municipality of Gstaad does not conduct any checks, the broadcaster said.