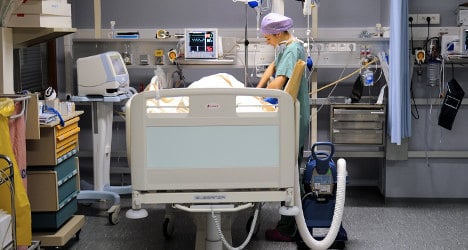 A French court has denied a wife's effort to end her quadriplegic husband's life. Photo:Philippe Haguen/AFP

A French court on Thursday ruled against ending the life of a 38-year-old quadriplegic who has been in a vegetative state for years and whose family have been divided about his fate.

Doctors treating Vincent Lambert, as well as his wife, wanted to cut off intravenous food and water supplies but his deeply religious Catholic parents and other family members opposed the decision and took the matter to court.

A 2005 law in France legalizes passive euthanasia, where a person causes death by withholding or withdrawing treatment that is necessary to maintain life.

The doctors in the hospital in the northeastern city of Reims wanted to take the step on the basis of this law. Lambert has been in a vegetative state since a road accident five years ago.

But a court in Chalons-en-Champagne near Reims "ordered the doctors to maintain food and water" intravenously, said Jean Paillot, a lawyer for
Lambert's parents.

The hospital authorities can now appeal the decision before France's Constitutional Council.

The case comes amid growing debate in France over legalising euthanasia and assisted suicide after several tragic end-of-life stories.

Assisted suicide, which is legal in Switzerland, allows a doctor to provide a patient with all the necessary lethal substances to end their life, but lets them carry out the final act.

Euthanasia goes a step further, and allows doctors themselves to administer the lethal doses of medicine. This practice, legal in the Netherlands, Belgium and Luxembourg, is the most controversial.

French President Francois Hollande promised during his 2012 presidential campaign to look into legalising euthanasia and this week reiterated his position, but stressed that it would have to be monitored under "strict" guidelines.