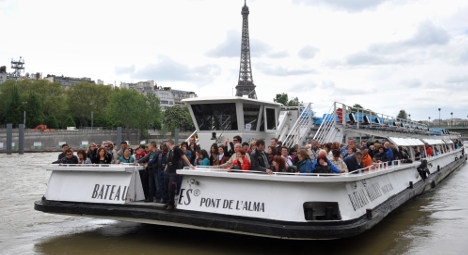 Paris no longer the most visited city in the world, according to a report in Le Figaro. File photo: Pierre AndrIEU

The Louvre, the Eiffel Tower, Notre-Dame Cathedral, the cobbled streets of Montmartre all help pull in millions of visitors to Paris each year.

But is it enough for the French capital to retain its long-held and often proudly-quoted title as the “most visited city in the world”.

According to a disputed report in Le Figaro newspaper on Thursday, that title now belongs to London.

It seems the British Museum, the Tate Modern, Camden Market, The Tower of London et al are more of a pull than traditional attractions in Paris.

Quoting figures from tourist agency Visit Britain, Le Figaro stated that London broke the 16-million bar last year for the number of visitors in 2013. It then claimed Paris had welcomed 15.9 million visitors .

Bangkok, known as the gateway to Asia, stands in third place and New York in fourth.

Clearly peeved by the claim their city had lost its cherished title Paris tourism authorities hit back, saying the comparison was based on figures that were not comparable.

London's 16 million figure was actually a projection based on visitor numbers for the first nine months of 2012, where as the 15.9 million figure for Paris was for the year 2012. Figures for 2013 have still not be finalised.

The Town Hall in Paris said the only figures that were therefore worth comparing were for 2012, which was 29 million visitors to Paris and 27.6 million to London. Tourism chiefs in Paris say visitor numbers have also risen 5.2 percent in 2013, based on the first nine months.

"So at this stage Paris remains the top tourist destination in the world," said a statement for the Town Hall.

The claim that Paris has been dethroned will be considered by some as yet another nail in the coffin of a capital and a country, that critics say is falling behind the times and failing to modernize.

Last year The Local reported how London had also pinched the title of “World’s Best City” from Paris according to a biennial survey.

“It should be a warning sign to all stakeholders of Paris,” said the authors of the report at the time.

The Mayor of London put the city’s success in attracting millions of visitors in 2013 down to the “Olympic effect”, which spilled over from the 2012 games. Normally Olympic host cities see a dip in the number of visitors the year after the Games, but London has seemingly bucked the trend.

“The image of London has changed because of the Olympics,” said Kit Malthouse, deputy mayor of London. “People saw a beautiful city, open and vibrant and not just the usual clichés about Beefeaters and the Queen.”

Ten reasons why Paris is better than London Paris was expected to enjoy the benefit of hosting the 2012 games until London’s bid triumphed against all the odds.

Later this year the French capital is expected to put a bid in to host the 2024 Olympic Games, that’s if the scars of losing out on 2012 have sufficiently healed.

Although Paris will not want to rely on an Olympic Games ten years from to now to try and make up the numbers on London.