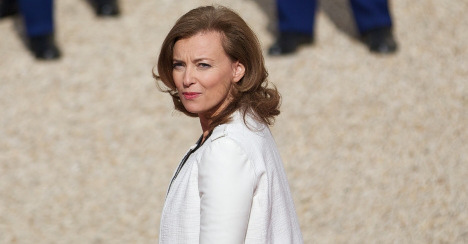 Trierweiler is expected to remain at an unnamed Paris hospital for several more days radio station Europe 1 reported on Thursday.

The so-called first lady has been in hospital since last Friday when Closer magazine published a seven-page spread about her partner's alleged affair with actress Julie Gayet. Hollande is yet to visit her in hospital.

The exposé claimed Hollande, 59, has been having a fling with 41-year-old French actress Julie Gayet at a flat that is just streets from the presidential palace. Hollande declined to comment on the allegations at his new year press conference on Tuesday, but pledged to elaborate before his trip to the United States in mid-February.

Gayet has not made any public comment either, but she had pledged to sue Closer over the article. For his part, Hollande seemed to rule out taking legal action when speaking at his press conference on Tuesday.

Trierweiler’s closest friends, who like her are journalists, have been staying close by to support her, according to media reports. She is apparently questioning if the story was not an attack launched by an unfriendly corner of the media left unhappy by her presence in the presidential palace.

Her mental state is characterized by “highs and lows”, Europe 1 reported. Though she was allegedly touched by Hollande’s discretion during his press conference, in which he said the issue is private.

A source close to the couple told AFP that Hollande had not been to visit Trierweiler in hospital and confirmed media suggestions that the couple's relationship had been unravelling for months before the revelation of the affair.

It is not clear however if he has decided to stay away or if she is refusing to let him visit.

Earlier this week Le Parisien claimed that Trierweiler would be seeking clarification from Hollande on their relationship and whether she would remain France's first lady, which is not an official legal title but does come with an office and a team of a staff.

Hollande told the world's media on Tuesday that he would clarify their relationship before he travels to the US next month, on an official trip which Trierweiler was scheduled to join. The story has since become completely taboo among the president’s inner circle and other members of the government.

“Though no one is talking about it, everyone is thinking about it,” Europe 1 said, citing a confidential source. “The president has to make up his mind quickly.”