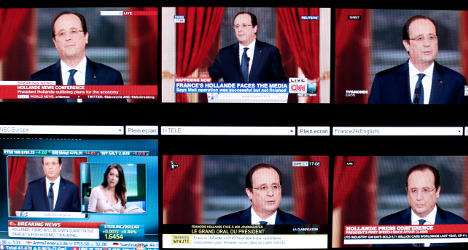 Hollande was the subject of media attention from around the globe on Tuesday but there was a different reaction to his press confernece in France and the UK. Photo: AFP

Britain's newspapers were on Wednesday left mystified by their French counterparts' reluctance to quiz President François Hollande over claims of an affair, concluding "they do things differently" across the Channel.

Britain's rowdy media was gleefully awaiting an inquisition over his reported affair with actress Julie Gayet as he arrived to deliver a press conference at the Elysée Palace in Paris.

But they were left disappointed when "deferent" journalists largely left Hollande free to explain a series of economic reforms.

"How odd it all felt," said the Daily Telegraph's Michael Deacon.

"For centuries we had mockingly stereotyped the French as sex-mad. When, in reality, these spotlessly abstemious souls have so little interest in sex that when their own head of state is caught up in the juiciest scandal to hit politics since Clinton-Lewinsky, they only want to ask about social security," he joked.

He asked whether the French "were mad, or are we?"

The Times compared the developing story to the Profumo Affair, the 1963 British sex-scandal that forced the resignation of secretary for war John Profumo.

The Rupert Murdoch-owned paper said it was "clear that the big topic of the day would be treated with kid gloves by the French press corps."

"When Mr Hollande's speech ended, Alain Barluet, a political correspondent for Le Figaro and the chairman of the Presidential Press Association, seized the microphone and rose to his feet with the look of a man facing a firing squad," wrote the paper's Adam Sage.

"A couple of other French journalists did broach the issue again, but that was pretty much that. In short, they ensured that the peace had been safeguarded in the republic once again."

Quentin Letts from the centre-right Daily Mail mocked those charged with quizzing Hollande, who he called the "most unlikely swordsman since Inspector Clouseau".

"Before him sat a salon of oyster munchers, the powdered, poodling, truth-smothering trusties of polite Parisian opinion," he wrote.

"Would he get away with this in Britain or America? Possibly not," said The Guardian's Jon Henley. "But, outraged tweets by Anglo-Saxon hacks notwithstanding, this was France."Meanwhile in France

The reaction to François Hollande's performance in France was much more positive.

The president's insistence that he would clarify his relationship with Trierweiler before his trip to the US was accepted by the French media. There was no outraged columns that he had avoided questions about his private life with the French media giving most coverage to his announcements about the economy

"Hollande social democrat: A new chapter in his presidency or a "verbal virage", was the headline in L'Express.

Even the deputy director of right leaning newspaper Le Figaro, Yves Threard, commended Hollande on his performance, at the press conference, saying he managed to avoid the trap that was posed by questions surrounding his private life.

"François Hollande: neither blurry, nor soft", was the headline on Le Point's website In the piece Charlotte Chaffanjon, said that Hollande's stance around questions regarding his provate life was typical Hollande – "a synthesis".

"He talked about private life, but also mentioned painful moments…In the end he found the right balance between public and private life," Le Point concluded.

Elsewhere headlines were dominated by his announcement of a €30 billion responsibility pact between the state and businesses aimed at reducing labout costs in exchange for increased recruitment.

That announcement was treated by the press as a turn to the right by Hollande in terms of "policy and method".

"His line, is that of a socialist turn social democrat, as close to a Tony Blair, as any French Socialist," writes Le Parisien's Matthieur Croissandeau.