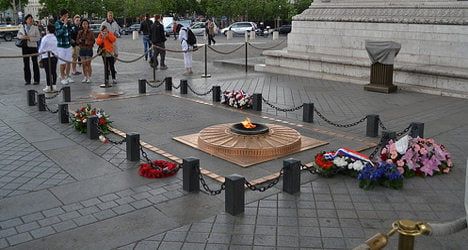 Police said a drunk man tried to put out the eternal flame at the Arc de Triomphe war memorial in Paris. Photo: Mckrista1976/Flickr

Under normal circumstances his actions may have been commended, except in this case the flickering flames were not a sign of a fire but were in fact the eternal flame that burns in front of the Tomb of the Unknown Soldier underneath the arch at the famous monument.

The man himself appeared to have had a few too many demis, French newspaper Le Parisien reported.

Police said the man was “in a drunken state”, had parked near the war memorial around 7 pm and then, armed with the extinguisher, tried to hop over the barrier that surrounds the flame.

He was arrested fairly quickly and subsequently admitted he wanted to put out the flame, police said.

The Tomb of the Unknown Solider was placed beneath the Arc de Triomphe at the Place Charles de Gaulle in 1920. It includes the remains of an unidentified soldier who represents all the soldiers killed during World War I.

The eternal flame was first lit in 1923 and is rekindled every night at 6:30.

This isn't the time The Local has reported on someone during something while drunk that he or she later regretted. See links below: