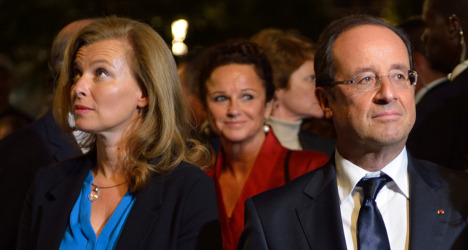 French President Francois Hollande admitted on Tuesday he was going through a painful time in his private life but refused to say whether his relationship with his long-term girlfriend Valerie Trierweiler is over after the revelation of an affair.

Trierweiler, France's de facto First Lady, has been in hospital since Friday with stress linked to last week's revelation that he has been having a liason with Julie Gayet, a blonde actress 18 years his junior.

Hollande said that the issue of whether Trierweiler accompanies him on an official trip to Washington next month would be resolved before then. The couple are due to spend a night at the White House as guests of Barack and Michelle Obama.

At an eagerly anticipated press conference at his official residence, the Elysee Palace, Hollande, 59, insisted on his right to address his personal problems in private.

Asked directly if Trierweiler was still France's First Lady, he replied: "I understand your question and I'm sure you will understand my response.

"Everyone in their personal lives can go through tough times. That is the case (for me). These are painful moments.

"But I have one principle: these private affairs are dealt with in private. This is neither the time nor the place to do it so I will not be responding to any questions about my private life."

Trierweiler, 48, was admitted to hospital hours after glossy magazine Closer published a series of photos showing Hollande and Gayet, 41, arriving separately for trysts at a flat close to the presidential Elysee Palace.

Media reports claimed the former journalist was suffering from low blood pressure, exhaustion and a "severe case of the blues."

She had initially been expected to be discharged after three nights but aides announced on Monday that she had been advised to extend her stay, saying "doctors believe she needs more rest."

Friends and political allies of Hollande had urged him to move quickly to clarify the situation by stating clearly whether he is still in a relationship with the woman who has been his girlfriend since 2007.

But with Trierweiler still in hospital, the notoriously undecisive leader opted to put off a public announcement of any decision the couple have made about their future together.

Friends of Trierweiler have been quoted in French media as saying she is willing to forgive her errant partner and try to patch up the relationship if he calls a halt to the fling with Gayet.

The traditional reticence in France's media and political class over what is seen as prying into the private lives of public figures had ensured that initial reactions to the revelation of the affair were subdued.

But once it became clear that his relationship with Trierweiler, who has five staff funded by the taxpayers, could be over, it became a legitimate news story for the country's media.

No security risk in visits to love nest

As well as the position of Trierweiler, the affair has raised questions about whether Hollande had taken unnecessary risks with his own security by visiting the actress at a borrowed flat close to the Elysee.

Sebastien Valiela, the photographer who took pictures of Hollande arriving at the flat on a chauffeur-driven scooter, has said it was obvious that the head of state was inadequately protected

But a stressed and drawn-looking Hollande dismissed that claim.

"My security is assured everywhere and at all times whether I'm on official business… or travelling privately, when I obviously have a less extensive protection squad. No one needs to have any worries about that."

Having put her career as a journalist for Paris Match on hold after Hollande's 2012 election, Trierweiler has previously accompanied the president on overseas visits to China, Japan and India, her glamorous looks and chic style often ensuring that she generated more headlines than her partner.

Hollande, whose approval ratings were already the lowest of any president of recent times, appears to have avoided any significant political damage from the scandal.

Polls suggest just over three in four voters believe Hollande's love life is his own business and one survey even showed a slight upturn in support for the beleaguered leader.

Twice-divorced Trierweiler has officially been Hollande's partner since 2007, when he left Segolene Royal, a fellow heavyweight in the Socialist Party with whom he has four children.

Dressed in a sombre navy blue suit and matching tie, the 59-year-old Socialist leader made no mention of the turmoil in his private life during an opening 45 minutes dedicated to outlining a new pro-business economic policy aimed at spurring growth and creating jobs.

A centrepiece of the plan is a 30 billion euro ($40 billion) cut in payroll taxes by 2017 through the abolition of so-called family contributions paid by companies and independent workers.

Hollande vowed that the reduction in company taxation would not be balanced by a corresponding increase in taxes on households.