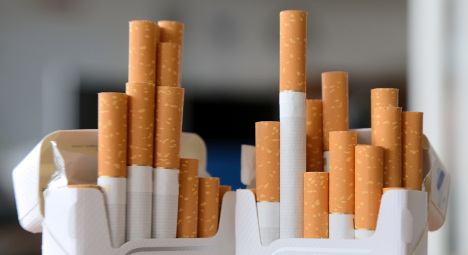 A 20 centimes hike in the price of any packet of cigarettes came into force in France on Monday, the latest price rise targeting tobacco.

The hike in prices was originally due to come in a week earlier, but was postponed for bureaucratic reasons, according to the Ministry of Finance.

Normally, price changes are imposed on the first Monday of the quarter.

The new prices will mean that a packet of Marlboro will set smokers back by €7, meaning those who smoke a packet a day will be left with a €2,555 hole in the bank account by the end of 2014.

A packet of Camel or Philip Morris, however, will cost slightly less at €6.90; and Gauloises will be €6.60.

Lucky Strike and Winston cigarettes are among the cheapest at €6.50.

There’s at least one small piece of good news for smokers: the French government had initially proposed raising the price of all cigarettes by 40 centimes.

However, the president of the French Tobacconists Association Pascal Montredon told the government that such a steep hike was “irrational” and would not be accepted by his members.

Taxes from cigarettes are expected to bring in nearly €15 billion in 2014. Had the government succeeded in imposing a 40-centimes rise, it would have banked about another €300 million. This map below claims to show the average price of a packet of cigarettes across Europe. Despite the price hike in France, the cost of a packet is still lower than in Britain.

@TheLocalFrance according to these stats a pack of cigs in the UK is even more expensive: pic.twitter.com/UrzTkOGFYK

The fact that cigarettes are now becoming even more expensive is likely to lead to more smokers trying e-cigarettes. Last week The Local reported how tobacco sales in France had been hit hard by the rise of the e-cigarette.

While e-cigarettes are subject to 20 percent VAT, just as in the case of normal tobacco, the devices are not subjected to the tobacco consumption tax, which represents 64.7 percent of the cost of a packet of cigarettes.

Professor Yves Martinet, president of the National Committee against Tobacco said this imbalance needs to be corrected.

"We need a middle range tax on e-cigarettes, that takes into account the health risks for the user," he said.

E-cigarette devices are welcomed by many as an effective way for smokers to give up the habit, but not all organizations in France have welcomed the devices.

In August, the French organization '60 Million Consumers' caused a stir with a report which claimed that e-cigarettes were "potentially carcinogenic" and not as safe as their manufacturers had made them out to be.

Scientists also found traces of acrolein, a toxic molecule emitted in quantities “that exceeded the amount found in the smoke of some cigarettes” as well as traces of Acetaldehyde, another potentially toxic chemical.

However, cardiologist Konstantinos Farsalinos, who has published five studies on e-cigarettes, criticized the French report in an opinion piece in The Local.

In October, the European Parliament voted against reclassifying electronic cigarettes as medicinal, which would have restricted their sale to pharmacies.

A French doctor who led a group of health professionals in supporting e-cigarettes this week, told The Local it was a "wise decision."