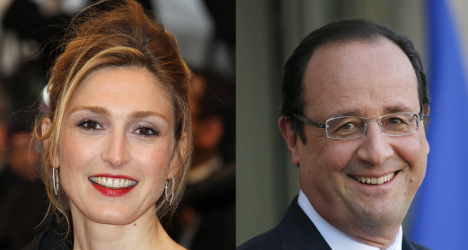 The story of French President François Hollande's alleged affair with an actress took a darker turn over the weekend when reports surfaced saying the suspected trysts took place in a Paris apartment owned by someone with ties to the Corsican mob.

The apartment on Rue du Cirque, not far from the Elysée Palace in the city's 8th arrondissement, was allegedly made available to Hollande and actress Julie Gayet by a woman who was married to a recently slain Corsican mafioso and who is the ex-wife of Michel Ferracci, who also has alleged links to Corsican mafia, French newspaper Le Monde claimed.

The news came as France's 'first lady' Valérie Trierweiler was hospitalized with exhaustion following the public revelations over the alleged infidelity.

Ferracci's name is on the mail box and the phonebook listing for the address, but in an interview with Le Monde he denied he's ever lived there. In fact it turns out the apartment belongs to his ex-wife, actress and friend of Gayet, Emmanuelle Hauck, who is renting the space from a real estate agency, he told Le Monde.

To back up its claims, the magazine printed photos of Gayet, 41, arriving at a flat in an upmarket part of Paris on December 30th, not far from the Elysée palace where Hollande lives.

A furious Hollande has not denied the affair but has threatened to take legal action over the "breach of his privacy". Gayet's lawyer has ordered the magazine to take the report off its web site, which Closer agreed to do on Friday evening.

The scandal surfaced as Hollande was expected to hold a massive press conference on Tuesday, scheduled before news of the alleged affair broke, that he'd hoped to use a pivot in his presidency.

Public opinion polls have pegged Hollande as the most unpopular president in French history, but a survey over the weekend revealed 84 percent of French people believe his image has not been harmed by Closer's revelations, whether true or not.