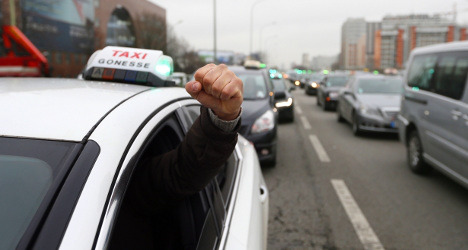 Driving in around Paris and other French towns on Monday morning may not be the wisest idea with angry taxi drivers, staging a go slow protest on major roads as well as at airports.

By around 11am there were reports of around 200km of tail backs across the country and the notorious peripherique around Pairs had ground to a halt in parts. Trouble flared on the A106 when drivers tried to block the motorway before French riot police were forced to intervene.

Taxi drivers and their unions had called for a nationwide protest against private hire cars. Protests, which will see taxis travelling at snails pace along roads, took place in Paris and several other towns across the country.

In the capital the drivers were set to meet up near Paris' two primary airports (Charles de Gaulle/Roisy and Orly) around 6 am and then plan to caravan into the heart of the city with a final stop in the seventh arrondisement at Place Auban. But by 11am the taxi convoy had still not left Orly Airport, French newspaper Le Parisien reported.

Got attacked in an @uber by cab drivers on strike near Paris airport: smashed windows, flat tires, vandalized vehicle and bleeding hands.

Attackers tried to get in the car but our brave @uber driver maneuvered us to safety, changed the tire on the freeway and got us home.

The protest stems from an increasingly bitter dispute between conventional taxi drivers and their newer, higher-end rivals, the private hire cab or VTC (véhicule de tourisme avec chauffeur) as they are known in France.

Furthermore, anyone wishing to reserve a car ahead of time, would have to register at least 24 hours before their journey, and then wait at least 15 minutes for it to arrive, no matter how close it might be.

If challenged by Paris police, it will be the responsibility of the private car chauffeur to prove that the booking was made at least 15 minutes earlier, according to French media reports.

Conventional taxi-drivers, who have to pay a staggering €200,000 for their licenses, have suffered from the increased competition, since VTCs were introduced in France in 2009.