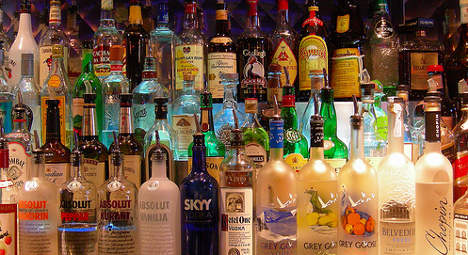 Five people enjoying a late night drink in the Alpine ski resort of Alpe d’Huez were injured, two seriously, when a bottle of rum exploded, French police reported on Sunday.

According to reports, the explosion took place around midnight when a group of customers approached the bar to settle their bill.

The boss offered them a shot of rum each, to thank them for their custom, to which they gratefully accepted.

The bar owner is then believed to emptied rum from a five litre bottle into a smaller litre bottle to serve the punters, but as he did, he spilled some of the alcohol on the bar.

Unfortunately at the same one of the customers lit his cigarette lighter, which ignited the rum in the five litre bottle, effectively turning it into a “flame thrower”, police said.

Although the incident may have looked spectacular, it could have proved deadly. Five people had to be rushed to hospital in Grenoble. Two of the more seriously injured had to be flown there by helicopter.

The five customers suffered burns of varying degrees, but their condition is not believed to be life threatening.

The bar owner managed to put out the fire using an extinguisher, before any serious damage was done to his pub.