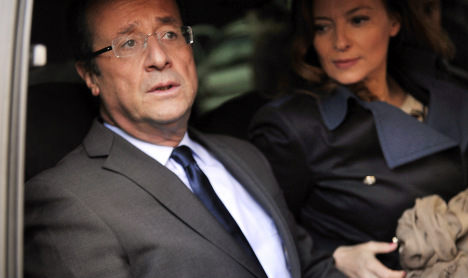 Whilst largely defending the unmarried Hollande's right to a private life, national and regional dailies admitted the hundreds of journalists at his bi-annual press conference on Tuesday will only have one question in mind.

The French president, who lives with his partner Valerie Trierweiler, has not denied the relationship with 41-year-old actress Julie Gayet but reacted furiously to Friday's publication of the allegation in Closer magazine.

"Having to explain, a few minutes before sketching out his vision for France, instead, what he has in mind for his relationship (with Trierweiler) promises to be a highly interesting performance," the Sud-Ouest newspaper wrote.

Hollande, whose popularity ratings have hit record lows in recent months, had been expected to use the January 14th press conference to announce a new strategy aimed at lifting France out of its economic difficulties.

Hollande was due to outline the "responsibility pact" he is offering a disgruntled business community whereby companies would benefit from lower labour taxers in exchange for job creation.

Closer's article, which describes a president travelling through Paris at night on the backseat of a scooter to see his lover, could come and spoil Hollande's new year, papers warned.

Tuesday's press conference was "expected to mark a political resurgence by confirming the social-democratic shift" the president hinted at in his New Year address, L'Est Républicain said in an editorial.

"But all eyes will now be on the president's reaction," it said.

L'Alsace newspaper described Closer's allegations as "catastrophic in every possible way for Francois Hollande" and several other newspapers concurred that the timing could not have been worse.

However, one regional newspaper, La Nouvelle République du Centre-Ouest, argued that "it remains to be seen whether his tabloid antics will harm Francois Hollande, whose ratings were already abysmal."