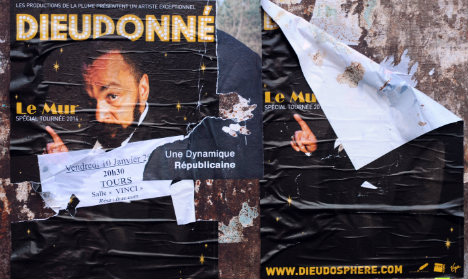 The Conseil d'Etat confirmed a decision banning Dieudonne M'Bala M'Bala's show in the city of Tours on the grounds that his diatribes against Jews posed a threat to public order.

The comic had suffered a first setback when the tribunal overturned a decision giving the show the go-ahead in Nantes on Thursday, the first date of a national tour.

"We'll be there again tomorrow," said Sanjay Mirabeau, one of Dieudonne's lawyers, pledging to try to strike down a ban on Saturday's show in Orleans.

The legal tussling pits France's commitment to freedom of expression against restrictions on hate speech.

The French government has branded Dieudonne — who has been repeatedly convicted in the past under anti-racism legislation — a "peddler of hate" for his sketches, widely viewed as anti-Semitic.

The interior ministry has urged local authorities in towns to host his nationwide run of stand-up shows to ban them on public order grounds.

The comic has challenged each ban individually in local courts. And, so far, lost.

Paris police announced Friday that it was slapping bans on several shows scheduled over the coming days in the capital, setting the stage for more days of legal battles.

Dieudonne's supporters, and even some who reject his brand of humour but defend his right to express himself, have displayed concern over what they say is a troubling breach of freedom of speech.

Several legal experts told AFP that the court decisions on Dieudonne will serve as precedents in other cases — and warned that the European Court of Human Rights could still scuttle France's stance.

But French government lawyers argue the fundamentally racist nature of the comedian's act means it cannot be afforded protection under France's constitutional provisions on freedom of speech.

He also directs volleys of abuse at prominent French Jewish performers, rounding off one rant about radio presenter Patrick Cohen with the observation: "Gas chambers … a shame."

And he has been slammed for his trademark "quenelle" stiff-arm gesture, which has been described as a disguised Nazi salute.

The gesture, which Dieudonne insists is purely an "up yours" to the French establishment, has taken on a life of its own.

Dieudonne, now 47, started his career as part of a double act with a Jewish childhood friend, Elie Semoun.