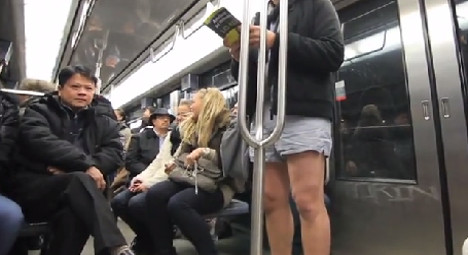 Sunday is the annual "No Pants Subway Ride" in Paris .Will you be going?

If you were hoping to take Sunday 'clothing-optional' comfort into public then here's some good news for you.

'No Pants Subway Ride' is an annual event that started as a prank by a group of New Yorkers in 2002. Since then it's spread to undergrounds all over the world.

So if you're in Paris this weekend don't miss the chance to remove your trousers in public. You’ll have plenty of company.

On Sunday a group of people will congregate on Metro Line 1 on Sunday at  3 pm at the Charles de Gaulle Etoile station, simply remove their pants and ride the train.

The only rules are to act normal and not to laugh. It’s intended to be fun for you and the unsuspecting people on the train who will be surrounded by pants-less strangers.

See below for a clip from the '2013 No Pants Subway Ride' in Paris.

You can find out more about the event by going to the official Facebook page here.