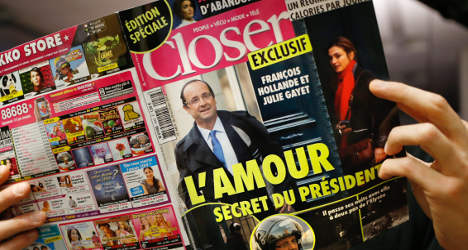 The magazine Closer says it is removing the story of Hollande's alleged affair with Julie Gayet from its website. Photo: Thomas Coex/AFP

The French magazine that revealed an alleged affair between President Francois Hollande and actress Julie Gayet said Friday it would remove the report from its website at the request ofthe actress.

"Julie Gayet's lawyer contacted us to request we remove from the website all mention of this relationship," Laurence Pieau, editor of Closer, told AFP, adding the information would likely be taken off the site on Friday evening.

Hollande issued a statement earlier on Fridat saying he would possibly take legal action against the magazine for the report, claiming it had violated his privacy. Hollande's assertions about personal privacy were echoed by other French politicians and bureaucrats.

Gayet, a long-time actress without star status, had not made any public comments on the report until her attorney contacted Closer to remove the report. It wasn't clear if she also threatened legal action.

To back up its claims, the magazine printed photos of Gayet, 41, arriving at a flat in an upmarket part of Paris on December 30, not far from the Elysee palace where Hollande lives.

Half-an-hour later, a man whom they identify as Hollande's bodyguard inspects the hallway of the apartment block before the arrival of a scooter with two helmeted men on board, one of whom they say is Hollande — although his face is never revealed.

Hollande has reacted furiously to the allegation – which were backed up by photos reportedly showing the 59-year-old president entering Gayet's flat – but did not deny it, threatening legal action over what he called an attack on his right to privacy.

Pieau however said the magazine had so far had no contact with the French presidency.

The French, however, are known for being tolerant of their leaders' infidelities.

On Friday, politicians from across the political spectrum supported Hollande in his right to keep his private life private.

And according to Patrick Eveno, an expert on media history, what Hollande does in the bedroom will not have an impact on public opinion.