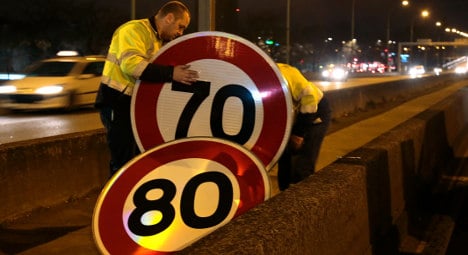 Slow down: Speed set to be cut on Paris's peripherique from Friday onwards. Photo: Jacques Demarthon/AFP

Traffic will be a little slower starting on Friday on Paris’ busiest road, ‘the peripherique,’ but it won’t be because of a nasty crash or lousy weather.

This time, it’s a new lower speed limit on the 35 kilometre long road that rings the city. From 5am on Friday the top speed will be 70 km/h, down from 80 km/h. Crews have been hard at work changing 150 speed signs, a job that will cost about €22,500.

“We are all certain this will bring the number of injuries and deaths down on the ring road,” Paris Mayor Bertrand Delanoë is quoted as saying in French daily 20 Minutes.

The road, which sees 1.3 million drivers on its tarmac everyday, also is also renowned for being dangerous. It is the site of several deaths and hundreds of injuries per year. But officials also claim there will be environmental and quality of life benefits from the cut in speed limit.

French environmental agency ADME found the road was responsible for 35 percent of fine particle air pollution linked to road traffic in Paris. Reducing the speed by 10 km/h would mean a five percent reduction, the agency claims.

However, an automobile group argues the change will have zero environmental impact.

“A 10 km/h drop in the speed limit will usher in a certain reduction of carbon dioxide emissions, but at the same time, it will mean higher production of benzene,” said Director General Pierre Chasseray of 40 Millions d’automobilistes in 20 Minutes. “So in the end, it’s not an improvement," he said.

The reduced speed limit looks like it could mean a slightly quieter life for the 150,000 people who live next to the busy artery. Paris Town Hall has said it expects a reduction of 1.2 – 1.6 decibels. But that change will be barely “noticeable to the human ear,” noise watchdog Bruitparif was quoted as saying newspaper Direct Matin.