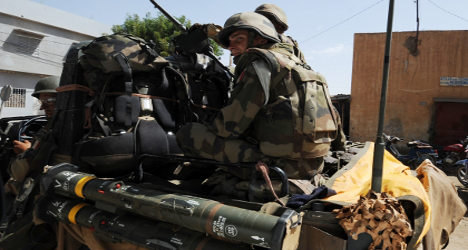 The numbers of French troops in Mali are set to be cut with Hollande insisting the situation is under control. Photo:AFP

France will cut its troops in Mali to 1,600 by the middle of next month from the current level of 2,500, President Francois Hollande said Wednesday.

Speaking at an airbase in Creil in northern France, Hollande said the "situation is well under control" in Mali, where the "key objectives of the mission have been accomplished."

"The troop size will be reduced from about 2,500 at present to 1,600 and then to 1,000 which is the number necessary to fight any threat that might resurface as these terrorist groups are still present in northern Mali," the president said.

France launched the military Operation Serval in its former colony on January 11, 2013 to repel an Islamist advance following a coup.

The intervention has been widely hailed as a success internationally for stopping Al-Qaeda-linked militants and Tuareg rebels from descending south of the sprawling country and advancing on the capital Bamako.

Friends of Syria to meet in Paris

Meanwhile French attempts to play a part in resolving another conflict abroad will see it host a "Friends of Syria" meeting in Paris on Sunday with leaders of the mainstream opposition to President Bashar al-Assad ahead of peace talks due later this month. US Secretary of State John Kerry is due to attend.

A French diplomatic source said the foreign ministers of the United States, Britain, France, Germany, Saudi Arabia and Qatar will be present, among others, as will Ahmad Jarba, head of Syria's mainstream opposition National Coalition.

The Coalition has yet to decide whether it will take part in UN-backed peace talks aimed at negotiating an end to a conflict that has left more than 130,000 people dead and millions displaced since it erupted in March 2011.

The different factions in the Coalition were unable to reach an agreement on participation at two days of talks in Istanbul this week and postponed a decision on the issue until next week.

The Syrian National Council, the main group in the Coalition, is threatening to boycott the peace talks unless it has assurances that Assad will be forced to give up power.

The Syrian government has said it will attend the talks but that Assad's departure is not up for negotiation.