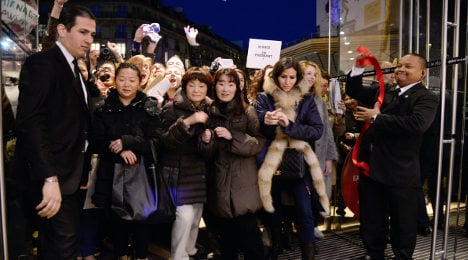 Shoppers storm a department store on the first day of the winter sales on January 8, 2014 in Paris. Photo: Bertrand Guay/AFP

Tough economic times and changing behaviour are eroding the once sacred and feverishly anticipated French tradition of January sales, which kicked off on Wednesday.

Although 74 percent of French shoppers said they planned to hit the stores this year, that figure is down from 85 percent in 2011, according to an Ipsos survey in French daily 20 Minutes. The economic downturn is playing a role, but so has the shattering of the sale paradigm.

These days French companies are running deals even before the official sale period opens.

“There are promotions almost permanently and customers signed up for loyalty plans can get deals all year round,” consumer expert Aude Moussac told 20 Minutes. “For those people the sales started on December 26.”

There is also a rush among store owners to be the first to mark down their products before the official sales season kicks-off, which has served as a pressure release valve for the once frenzied first day of the sales, daily Direct Matin reported.

The internet has also been stealing customers as well, but it’s not immune from softer sale spending. The Ipsos study predicts 56 percent of French shoppers, down from 58 percent last year, will be grabbing online deals during the sale period.

The sale season is set to run through February 11.

Essential dates in the French calender for 2014 What could otherwise be a grim opening day will likely be buoyed by shoppers from far and wide, notably tourists. Paris greeted 29 million visitors in 2012 and many of them came to the capital primarily to hit the stores, according to a new study the Paris Tourism and Convention Bureau.

A 2012 study from from the Paris-Ile-de-France Regional Tourism Bureau says 16 percent of tourists reported shopping was a “strong motivation” in their choice to come to the City of Light. The survey pointed out that 30 percent of Chinese and Japanese visitors to Paris come for one thing and one thing only – shopping. The Louvre, the Eiffel tower etc are all just a bonus, it seems.