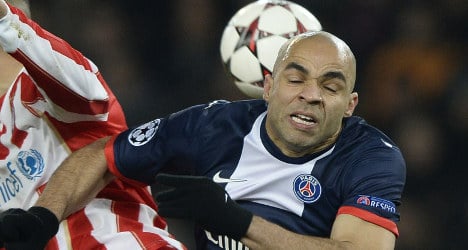 On the day a high-profile German footballer came out as being gay, PSG's Alex sparked a row over homophobia after views he expressed on a TV documentary. Photo: Franck Fife/AFP

The Brazilian international, a born-again Christian, reveals his faith-based disapproval of homosexuality in a documentary on evangelical believers in football by French pay TV company Canal+.

The programme was due to be broadcast on Wednesday evening, just hours after Thomas Hitzlsperger became the first German international, and one of only a handful of top footballers worldwide, to come out as gay.

Hitzlsperger, who earned more than 50 caps for Germany before retiring in September due to a knee injury, said in an interview with newspaper Die Zeit, for which he writes a column, that his awareness of being gay was "a long and difficult process".

"It is only in recent years I have come to realize I preferred living with a man," he said.

The coincidence exacerbated the backlash against Alex on social media.

"Here we have the reason why players find it so difficult to come out," wrote @gillypea1978 in one of many tweets on a similar theme.

The Canal+ programme also features former PSG defender Marcos Ceara, now an evangelical preacher, who declares: "I'm not really for homosexuality. For me that is a little out with God's plan."

Alex then delivers his quip about Adam and Eve, according to excerpts from the programme published by French daily Le Parisien.

Paris Foot Gay, an organisation which campaigns against homophobia in French football and has a partnership agreement with PSG, played down the significance of Alex's comments.

"You could say it was a bit of a stupid thing to say but, in the remarks reported to us, there is no incitement to hatred," a spokesman said.

"Frankly we've got bigger fish to fry. It is hardly a scoop to learn there are homophobes in football."

There was no immediate reaction to the comments from PSG, which was the first French club to sign up to a Charter against Homophobia in football pioneered by Paris Foot Gay.

Also featured in Wednesday's programme is the PSG and Brazil defender Thiago Silva, who attributes his recovery from tuberculosis to divine intervention.

"I almost died from TB in Russia several years ago. God saved me," Thiago Silva says