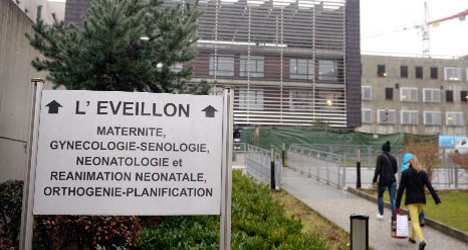 A new bacteria was responsible for the deaths of three French babies at this hospital in Chambery. Photo: Philippe Desmazes/AFP

The findings came after the parents of the three newborns, who died on separate days in early December, filed criminal complaints for manslaughter against the hospital in the town of Chambery in southeast France.

Analyses of several unused IV bags from the batch used to give the newborns nutrients while in the hospital's neonatal intensive care ward showed they all contained bacteria.

Tests showed it was a "type of environmental enterobacteria that was unknown until now and has no name," said Jean-Claude Manuguerra from the Pasteur Institut.

France's health minister, Marisol Touraine, said Tuesday that six of the IV bags showed the presence of a "a single and similar germ of an environmental origin" but did not give details.

Tests had been conducted on a total of 10 pouches. Marisol said the "place or method of contamination" was not yet clear.

A total of 137 nutrient pouches produced by French firm laboratoire Marette on November 28 and distributed to seven hospitals have been recalled following the deaths.