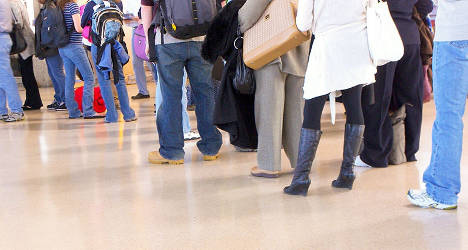 French state machinery is too slow and too costly, says François Hollande. Many expats will no doubt agree. Photo: David Morris

President François Hollande called on Tuesday for deep reforms and belt-tightening, saying the French state machinery was too costly and slow.

Hollande, whose Socialist government is grappling to bring down a budget deficit and fight rising unemployment, also pledged billions of euros in savings through spending cuts.

In a new year address to civil servants, he said the state machinery was "too heavy, too slow, too expensive," and vowed to focus on cutting expenditure

"We will try and do this everywhere, or wherever possible," he said, pledging to make 50 billion euros (70 billion dollars) in savings by 2017. "Everyone must do their bit."

France has already unveiled a cost-cutting belt-tightening budget for 2014 that aims to bring down the public deficit from the current level of 4.1 percent to 3.6 percent of gross domestic product (GDP) through spending cuts
totalling 15 billion euros and new taxes.

In his address, Hollande also vowed to minimise red tape and centralisation in keeping with his New Year's Eve message to "make life simple" for French citizens.

France has traditionally had well-funded and generous public services. Its health system is rated among the world's best, but is costly to run.

The country's multi-layered adminstration has meanwhile been criticised as overlapping and slow. Many foreigners also complain of excessive red tape and paper work in the French public service.

In July lastyear The Local reported how France was to cut red tape in order to make life much simpler for the public.

A set of 201 measures were launched, that could go some way to making “l’administration” more modern and user-friendly.

The government said the measures, which touched everything from speeding fines to ID cards and restaurant vouchers will save the country €3 billion ($3.9billion) in 2014 by speeding up and simplifying the interactions between the French state and those who live and run a business in the country.