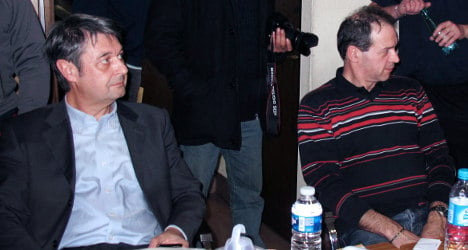 Workers at a French tyre factory facing closure released two executives on Tuesday a day after the pair were taken hostage as part of an effort to win better pay-off terms for employees.

Some of the 1,173 workers facing layoff at the Goodyear factory in Amiens locked the bosses in an office at the site on Monday morning, but by Tuesday afternoon the executives were set free, French daily L'Express reported.

Goodyear had promised not to negotiate with the workers' unions until the men were released.

All workers are threatened with lay-offs after the firm officially put an end to an obligatory consultation process in November.

The company and unions have been locked in tense negotiations since 2007 over restructuring and lay-off plans, but proposals put forward by the firm have all been rejected by the CGT.

One proposal that was abandoned in 2012 was a plan for voluntary redundancies, and the CGT hoped to bring an improved version of the plan back to the table.

The men were granted their freedom on the same day Maurice Taylor, the CEO of American firm Titan International, a candidate to take over part of the plant, called the act a "crime" and said it would be considered a "kidnapping" in the United States.

“These people should be arrested and prosecuted,” he said about the workers. “It’s a very serious crime, you could get life in prison. But in France, your government does nothing, it seems crazy.”

The Goodyear factory hit the news last year when France’s Minister for Industrial Renewal Arnaud Montebourg, wrote to Taylor pleading with him to come to their aid.

Taylor responded by mocking French workers for being lazy and spending more time each day chatting, than actually working, saying he would not be so "stupid" to get involved.

That response started a tit for tat row between the two, that descended into a row over American and French economic models.

It appears they had kissed and made up ealier this year when Montebourg announced that Taylor had backtracked and offered to partially take over the plant, in a plan that could preserve 333 jobs at the site for four years or more.

Holding bosses prisoner is not a new phenomenon in France and became rampant in 2009 during the height of the economic crisis.