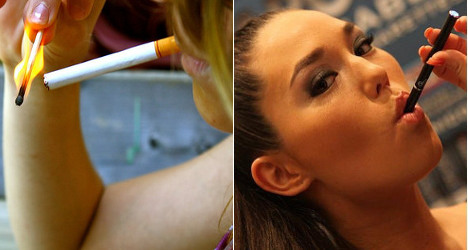 Tobacco sales have been hit hard by the rise of the e-cigarette in France. Photo: Alana Lushman/JoseandRoxanne/flickr

Sales of cigarettes dropped by 7.6 percent in France last year amid the growing popularity of electronic cigarettes and the impact of high taxes, tobacco shop owners said on Monday.

The business newspaper Les Echos put the drop at 7.7 percent to 47.5 million cigarettes, while other sources said preliminary data pointed to a drop in sales of between 7.4 and 7.6 percent.

Pascal Montredon, the head of the French association of tobacco shop owners, blamed the drop on sales to recent tax hikes.

Later this month the third tax hike in a little over one year will go into effect, having added 80 centimes ($1.10) to a pack of cigarettes.

That will take the price of the most popular brand to 7.00 euros and the cheapest to 6.50 euros.

Montredon said the high prices had encouraged the expansion of illegal imports, which he estimated as accounting for nearly one in four cigarettes smoked.

The growing popularity of electronic cigarettes, which for the moment are tolerated in many places where smoking is banned, "must have had an impact, but not as important as the parallel market," he added.

Some 80 percent of the cost of a pack of cigarettes in France is due to taxes.

On Tuesday a French health watchdog announced it was launching a widespread investigation into e-cigarettes, with 15,000 people from all age groups to be interviewed.

The Institute of Prevent and Health Education (INPES) is concerned about the meteoric rise in the number of e-cigarette users combined with the fact very little is known about the long term health impact of the devices.

The survey will aim to determine how many e-cigarette users there are in France and what their reasons are for using the product – for example for giving up smoking.

A survey last December carried out by Ipsos revealed one in five French people – around 10 million – had tried an e-cigarette.

The results of the INPES survey will be revealed later this year.