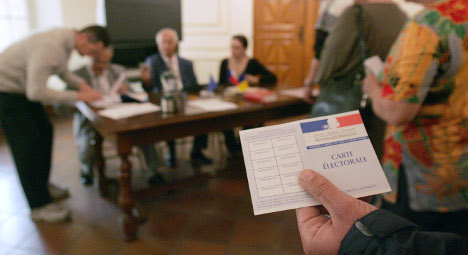 Should expats from EU nations get the right to vote in France and other EU nations? Photo: Boris Horvat/AFP

“I pay my taxes in France, so I should have the right to vote here.” It’s a common complaint among expats living and working all over France from Paris to Provence and from Brittany to Burgundy.

The current laws allow citizens from EU countries to vote in local elections but not national ones. So Brits, Germans or Spanish plying their trades in France, get a say over who might grant planning permission for their extension but will have no influence over the make-up of the government who will decide how much tax they pay, when they can retire and whether their child’s primary school is open five or four days a week.

What makes matters worse for some expats, like those from Britain and Ireland for example, is that they lose their right to vote back home (Brits lose the vote after being abroad for 15 years) and so can be left deprived of a fundamental right altogether.

Over the years since the EU was founded the issue of voting rights has grown and currently leading the charge for change is the “Let Me Vote” campaign.

The campaign is currently trying to garner 1 million signatures that under the European Citizens Initiative would force the European Commission to examine their initiative and decide how to act on it.

But time is running out. The deadline for Let Me Vote to pull in the million signatures is set for January 28th, 2014. Organizers say they are unlikely to hit their objective but still aim to raise awareness, so they can come back stronger next time.

Why the rules must change

Philippe Cayla (pictured), the president of the TV station Euronews, and the founder of Let Me Vote says it is now time for the EU to give Brits in France, Germans in Britain and the French in Spain the right to vote in national elections.

“Since the Maastricht Treaty we have talked about EU Citizenship, but what does it mean to be an EU citizen if you live in a different country and you don’t have the same rights as everyone else? EU citizens in each country should be equal.

“You can’t have an open market and encourage freedom of movement without ensuring voting rights," he adds.

Recent figures suggest there are 12 million EU nationals living in other member states, but not all nationals lose their right to vote when they go abroad. The French, for example, maintain theirs and even have their own MPs to represent them.

Campaigners say the possibility of changing the law to allow EU nationals to vote in their country of residence is complicated at a European level and it may only be possible if each individual country agrees to change the law in their own state.

However Tony Venables, director and founder of the European Citizenship Action Service, believes a change in voting rights is inevitable.

“The EU preaches about democracy to other countries but there’s citizens of Europe living in countries who don’t have a basic right,” Venables tells The Local.

“I don’t have the right to vote in Belgium in national elections that affect the future of a country in which my kids are educated. The national elections in each country affect that nation’s relation to Europe, in the UK it could even lead to a referendum on Britain’s place in the Union.

“The fact we have had never had this right is a subtle reminder to say that, even though you are living in another country, you are still foreigners. We will get some kind of solution, it’s inevitable."

One country that has historically put up resistance to giving EU nationals the vote is France, believing it could be the thin of the wedge and lead to greater voting rights for foreigners, which continues to be a thorny political issue.

'They are only citizens in France, from time to time'

However, France is one of the few countries with a draft piece of legislation on the table that would grant EU nationals the right to vote in parliamentary elections.

The man behind the draft bill, Jean Christophe Lagarde the secretary general of the centre-right UDI party told The Local the current situation "can’t go on".

"EU nationals in France are considered citizens at a local level, because they have the right to vote but at a regional or national level they are no longer citizens.

"So they have a say in how primary schools are run, because that comes under the remit of a local mayor, but once their child goes to a collège or a lycée, these EU nationals have no say in what happens.

"They are only citizens in France from time to time, but it shouldn't work like that.”

Lagarde, however, draws the line at presidential elections believing EU nationals should not have the right to choose France’s head of state.

“It is not the president who makes the law, it is the parliament,” he said.

Country of residence versus country of origin

While most agree the situation whereby certain EU nationals are left without the fundamental right to vote is unacceptable, some say the answer is not to grant the vote on the grounds of the country of residence, but to ensure people never lose the right to cast their ballot in their country of origin.

This is the stance taken by the likes of Italian based British expat Harry Schindler, recently awarded the MBE, and fellow countryman Brian Cave, who is behind the blog “Pensionersdebout” (Stand up pensioners). Both have long campaigned for a change in the UK law that sees Britons lose their right to vote after 15 years living abroad.

“I pay my taxes in Britain, my pension comes from Britain, so I should have the right to vote back in Britain,” Cave, who lives in France, told The Local.

Others like French deputy Lagarde disagree: “It makes much more sense to vote in the country where you live, than where you are from. If I lived in Germany I would want to have the vote for the Bundestag elections.”

Is naturalization the solution?

There are also others who argue that Swedes, Germans and Brits already have the right to vote in national elections of other member states if they so wish – by becoming a citizen of that country.

Rainer Bauböck the co-director of the EUDO Citizenship organization argues this is exactly what they should do if they want to cast a ballot.

“This would send a signal to the sedentary native citizens that these immigrants have a long term commitment to their country of residence,” he argues.

Bauböck says just because an EU citizen lives in say, France and pays taxes in France and therefore has an interest in what happens in France, it doesn’t mean they deserve the vote in France.

“Voting rights cannot be determined just by a principle of affected interests alone,” he says. “Or else the whole world should have the right to vote in the next US presidential election.”

But how could it work? Should it be based on taxes or time spent in France or on how well you speak French?

CLICK HERE on the image below for a gallery of seven options for how expats could be given the vote. The Let me Vote campaign has adopted the old slogan “No taxation without Representation” and anyone who agrees with their campaign has little over two weeks in which to back it.