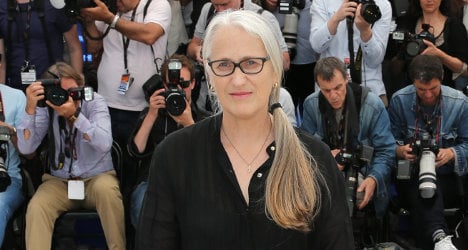 "I am truly honored to join with the Cannes Film Festival as President of the 'in Competition' features for 2014," said Campion in a statement. "To tell the truth I can't wait," added Campion who succeeds last year's jury head Steven Spielberg.

The 67th Cannes film festival will run from May 14-25 in the southern France resort town.

Campion who won the Palme d'Or for "The Piano" in 1993 also holds the distinction as the only double winner, her short "Peel" having picked up the top prize in that category in 1986.

"The Piano" was also a big winner at the 1993 Academy wards across the Atlantic, with Campion winning an Oscar for Best Screenplay while Holly Hunter and Anna Paquin won Best Actress and Best Supporting Actress respectively.

"A major filmmaker and indefatigable pioneer," was how the Cannes organisers described Campion.

She is not the first woman to head the Cannes festival jury.

Actresses Isabelle Huppert did so in 2009 and Isabelle Adjani in 1997, with Ingmar Bergman's cinematic muse Liv Ullmann also heading the jury in 2001 – the Norwegian actress has herself directed a handful of films.

Cannes "is a mythical and exciting festival where amazing things can happen, actors are discovered, films are financed careers are made. I know this because that is what happened to me!" said Campion.

"It is this worldwide inclusiveness and passion for film at the heart of the festival which makes the importance of the Cannes Film Festival indisputable," she added in her statement posted on the film festival website.

Born into an artistic family, Campion studied anthropology then painting before turning her attentions to cinema.

Last year she came to Cannes as head of the short-film jury.

Campion has recently won critical and popular acclaim for writing the television mini-series "Top of the Lake" which was shot in New Zealand.