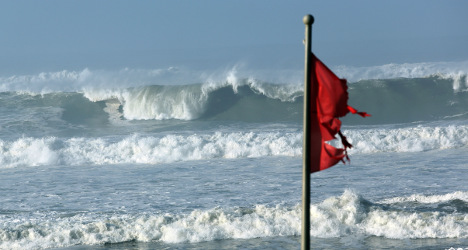 Bomb disposal experts were sweeping the Saint-Pierre beach in Locmariaquer, a small town in Brittany, where a security cordon had been put up around the area where the shells were gathered, after a walker stumbled across them on Monday.

Local police said strong waves triggered by a storm had lapped sand away from under a bunker, revealing the 80 shells that may still be live.

WWII bombs left over from the war regularly show up on French beaches and building sites.

In August last year The Local reported how a holiday-maker in south-western France got an unexpected ‘blast from the past’, after a bomb dating from World War II detonated and left him with burns to his body. In January 2012, authorities in the southern city of Marseille had to evacuate thousands of residents while disposing of an unexploded 250 kg US aircraft bomb dating from World War II.

In December a French soldier who kept an anti-tank rocket as a souvenir in his office was convicted for wounding himself and three colleagues seriously when the weapon – still armed – fell and exploded.

Earlier that week the dangers of handling ordnance were once again highlighted when a man was injured in eastern France when a Second World War shell, that he had found, blew up in his face.

The man, from Pont-de-Roide was trying to defuse the shell in his basement when it exploded in his hands. He was left with a fractured wrist and shrapnel wounds. He was taken to hospital but his life was not believed to be in danger.