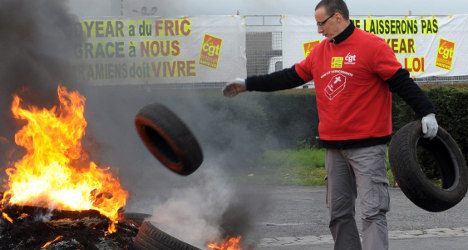 Workers have taken two executives hostage at a Goodyear tyre factory in Amiens which was the subject of an international row between a French minister and an American CEO last year.

Union representatives have promised to keep the men captive until they have come to better terms for the 1,173 workers who face unemployment with the proposed closure of the site.

"Even if we have to wait three or four days, they are not getting out," CGT union representative Franck Jurek was quoted as saying by RTL radio. "We're going to get mattresses and everything. We're sleeping here."

Reports of the kidnapping first appeared in the regional newspaper Courrier Picard which said employees at the plant took production manager Michel Dheilly and Human Resources director Bernard Glesser, against their will.

The newspaper says a large tractor tyre has been wedged up against a meeting room door to prevent the pair leaving.

Representatives from France's biggest trade union the CGT, subsequently confirmed the two bosses had been captured.

"They are firing everyone without giving them a say in it," the CGT's Mickaël Warmen told The Local, when asked why workers had taken the move.

His colleague in the CGT Jurek added: "We want to return to the negotiating table and to see if there is a buyer, and if there is no buyer, then we want a voluntary redundancy plan for everyone with a lot of money."

Jurek said the decision to take the executives hostage was made on Saturday and represented a "change in tactics" after they had grown fed up of losing battles through the courts.

The Goodyear factory hit the news last year when France’s Minister for Industrial Renewal Arnaud Montebourg, wrote to America CEO Maurice Taylor, who runs the firm Titan, pleading with him to come to their aid.

Taylor responded by mocking French workers for being lazy and spending more time each day chatting, than actually working, saying he would not be so "stupid" to get involved.

That response started a tit for tat row between the two, that descended into a row over American and French economic models.

It appears they had kissed and made up ealier this year when Montebourg announced that Taylor had backtracked and offered to invest in the factory.

Holding bosses prisoner is not a new phenomenon in France and became rampant in 2009 during the height of the economic crisis.