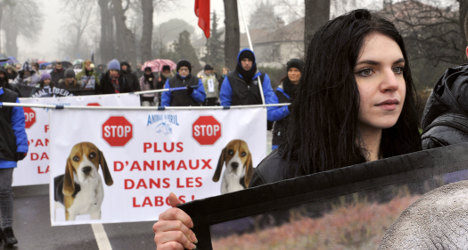 Animal rights protesters in France call for an end to testing. France is Europe's leader when it comes to the number of tests carried out on animals figures show. Photo: Thierry Zoccolan/AFP

In the year 2011, over 2.2 million animals were used for scientific tests in France which accounted for around one fifth of the European total of 11.5 million, according to a report by the European Commission.

The majority of the testing in French labs – 60.3 percent – was carried out on mice, with fish a distant second place, being subject to 16.1 percent of tests

And while the number of test animals used across the continent has fallen by about 500,000 since 2008, French numbers remained steady, Le Journal du Dimanche reported on Sunday, which paid particular attention to experiments on dogs, over 3,000 of which ended up in French laboratories in 2010.

The newspaper points out that French scientists are leading the way in terms of research, so it "is no surprise that France tops the league table" of animal testing.

But the Commission's report has prompted strong criticism from animal rights advocates, who noted France’s research establishment is over-reliant on the rodents, small mammals and birds it uses for testing.

Christophe Marie, spokesman for the Brigitte Bardot Foundation, noted France, like the United Kingdom and Germany, has historically been heavy users of animals for testing in their pharmaceutical and cosmetics industries. The practice continues to be taught to young researchers.

Marie told The Local on Monday that unlike in other European nations, French researchers in training aren’t allowed to opt out of animal testing in their studies. Thus the future scientists learn a way of working that necessarily involves animal testing.

“It’s tragic,” Marie said. “(Especially) when there are other means available.”

However, the scientific community noted the testing was vital for advancements, including the fight against cancer and Alzheimer’s disease. In addition to testing and research the animals also help produce medications. For example a horse can produce 30,000 doses of anti-rabies serum.

"We cannot do without animal experimentation," said François Lachapelle, from the Gircor (Interprofessional group on reflection and communication of research). "This is the only way to study a complete organism. And the observations are more reliable. Fo rexample 40% of the results obtained in primates are transferable to man," she told the Journal du Dimanche.

But the campaign calling for an end to testing appears to be gathering pace.

A petition, placed under the European CItizens Initiative (ECI) calling for an end to vivisection, was launched in December and has already been signed by over one million people.

At the end of last year The Local reported how a group of academics in France were backing a campaign to change the legal status of animals in order to help prevent acts of cruelty.

Currently article 528 of France’s civil code, which forms the basis for the country’s laws, states that animals are classed as “personal property”. But demands to create a new legal status that would class animals between people and objects as "living, sensitive beings" is gaining momentum.

The manifesto was put together by animal welfare charity "Fondation 30 million Amis" (Foundation of 30 million friends), whose president Reha Hutin told The Local: "The civil code, which is the foundation of the law in France considers animals are no different to a chair or a table."

"They are seen as just things. But in the EU treaty of Lisbon animals are considered as "sensitive creatures" yet France is saying they are just pieces of furniture that 'can walk by themselves'. You can see how ridiculous it is," she said.