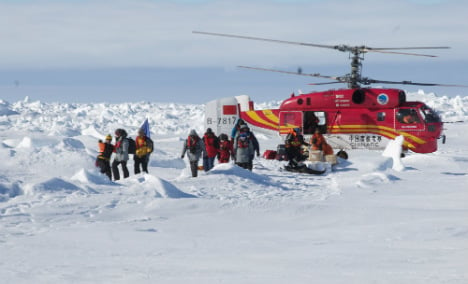 In an interview with AFP, Yves Frenot, director of the French Polar Institute, said he had no issue at all with rescuing those aboard the stricken vessel.

But, he said, the trip itself was a "pseudo-scientific expedition" that, because it had run into difficulties, had drained resources from the French, Chinese and Australian scientific missions in Antarctica.

"There's no reason to place Antarctica off-limits and to keep it just for scientists, but this tourism has to be monitored and regulated so that operators can be sure of getting help if need be," he said.

Its 52 passengers — scientists, tourists and journalists — were airlifted on Thursday to an Australian government supply vessel, the Aurora Australis, using a helicopter from a Chinese icebreaker, the Xue Long.

But the Xue Long itself may now be trapped in the ice, and the Aurora Australis has been placed on standby to see if the Chinese ship needs help.

In addition, a French Antarctic vessel, the Astrolabe, which resupplies Dumont d'Urville during the Antarctic summer between October and March was requisitioned for a week to help in the rescue operation.

The trip on the Akademik Shokalskiy was aimed at emulating a 1911-1914 expedition by the Australian explorer, Sir Douglas Mawson.

"This kind of commemorative expedition has no interest from a scientific point of view," said Frenot.

Because of the rescue operations, French scientists had had to scrap a two-week oceanographic campaign this month using the Astrolabe, said Frenot.

"But we are relatively lucky," he said.

"The Chinese have had to cancel all their scientific programme, and my counterpart in Australia is spitting tacks with anger, because their entire summer has been wiped out."

Antarctica has around 80 scientific bases, of which around 40 are permanently staffed and others manned on a seasonal or temporary basis.

Only three bases are inland; the others are on the coast.

"If we want these bases to operate all year round, it is essential to resupply with food and fuel during the brief window of opportunity," Frenot said.