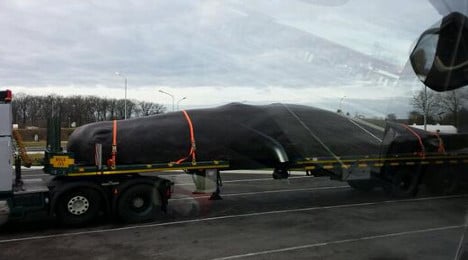 What is a sperm whale doing strapped to the back of a truck? Photo: Guillaume Macho

When a truck drives past with a 17-metre whale strapped to the back, you'd be forgiven for thinking your eyes were deceiving you.

And that was the case this week on the A31 motorway near the town of Thionville in eastern France.

With whales a protected species and the transportation of the animals subject to strict controls, the sight of the driver leaving the animal parked up in a service station car park naturally got a few passers-by asking questions.

One of them, Guillaume Machu, managed to capture the scene on camera and quickly posted an image to Twitter. "A whale marooned on a truck", he said, with the hastag #jamaisvu (never seen).

The image quickly caused a buzz on social media and among the local press in eastern France, where newspaper Républicain Lorraine took up the story and managed to solved the riddle of the beast dubbed the 'Highway whale'.

It was indeed a sperm whale, but not one that has ever swum in the sea or is ever likely to, for it was a life-size replica, made of fiberglass and is the creation of Belgian collective Captain Boomer.

It was returning for an exhibition in Valencia, one of the many it has been displayed at, to raise awareness of the animal and efforts to protect it.

"It was on the way back, to Limburg in Belgium," Bart Van Peel, the head of the collective, told Républicain Lorrain. "I'm sorry that this surprised people on the road. Normally we cover it up completely."