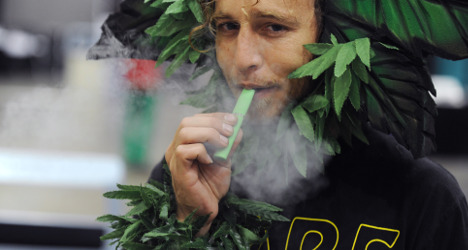 French scientists have found a hormone that blocks the high felt by marijuana smokers and could lead to a cure against addiction. Photo: Robyn Beck/AFP

A naturally occurring hormone acts as spontaneous defense in the brain against the high caused by marijuana and could be useful in preventing addiction, researchers said Thursday.

The hormone, which was not previously believed to have any biological effect of its own, actually cancels out the "high" caused by THC, the psychoactive ingredient in marijuana, according to lead author Pier Vincenzo Piazza of the French Institute of Health and Medical Research (INSERM).

"These researchers weren't trying to be buzzkills," said the journal Science, in which the study appears.

"Their discovery could lead to new approaches to treating marijuana intoxication and addiction – and it may allow researchers to isolate the medicinal properties of cannabis while blocking its behavioral and somatic effects."

About 147 million people globally — or about 2.5 percent of the population – use cannabis, according to the World Health Organization.

While cannabis products can alleviate symptoms of depression, glaucoma, spasms, and nausea associated with cancer and AIDS, they are also known to impair brain development, memory and lung function, and some say they can lead to addiction.

Researchers discovered the previously unknown role of pregnenolone when they administered high doses of cannabis to lab rats, on the order of three to 10 times more than the typical human marijuana smoker might be exposed to, Piazza told AFP.

The high doses of cannabis raised the brain's level of pregnenolone, which blocked the harmful effects of THC on the brain.

They also did tests in the lab on human cell lines – not human patients – that showed a similar blocking effect.

"We hope to be able to start clinical trials in people in a year to a year and a half," Piazza told AFP.

If pregnenolone's effect can be confirmed, it would mark "the first pharmacological therapy for cannabis dependence," he added.