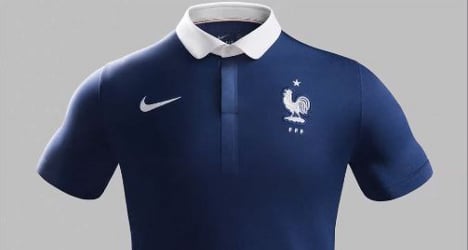 As 2014 begins, thoughts in France are already turning to the sporting highlight of the year – this summer’s football World Cup in Brazil.

Les Bleus barely scraped through the finals in dramatic fashion after an unconvincing qualifying campaign, but the French media – or at least the more superstitious among them – have spotted a change in the new kit, which they believe is a good omen for Brazil 2014.

The symbolic French coq (rooster), which has faced outwards on the jersey during some of the team’s darkest moments in recent years, has been flipped for 2014, and French football fans will be hoping it will bring with it a change in the direction of the team’s fortunes.

As pointed out this week by the Panthéon football blog of French newspaper l’Express, an inward-facing coq has been a feature of French football’s greatest triumphs.

The momentous 1998  World Cup victory in Paris? Inward-facing coq, as seen on the shirt of then-captain and current coach Didier Deschamps.

When Les Bleus followed up that triumph by beating Italy in the final of Euro 2000, their national symbol faced inward once again.

And as far back as 1984, when French legend (and current UEFA president) Michel Platini was top goalscorer in France’s victorious European championships, the rooster was turned inward.

However, after their runners-up performance at the 2006 World Cup, the decision was made – for unknown reasons – to do a 180 with Monsieur Le Coq.

What followed was a winless early exit from the 2008 Euros in Switzerland and Austria, and the greatest debacle of all, the 2010 World Cup in South Africa.

With the players in revolt against manager Raymond Domenech, over controversial forward Nicolas Anelka’s ban from the team, France collapsed to defeats to Mexico and hosts South Africa, could only earn a draw against Uruguay, and left the tournament in disgrace at the group stages. All the while, the rooster faced outwards – a coq “on the run”, as French radio Europe 1 described it this week.

With the national emblem now restored to its lucky direction, however, the French will be crossing their fingers that – touch wood – their boys can take advantage of an easy draw against Switzerland, Ecuador and Honduras, and make some serious progress in Brazil.

The team failed to fire on all cylinders during their qualifying route to the tournament, however, and there was more controversy along the way, with French public opinion of the players reaching a shockingly low level, and defender Patrice Evra trading insults with journalists.

If Les Bleus want to really make an impression on the 2014 World Cup, it will take more than a poultry symbol, so to speak.